How Is Sound Produced?

Sound is a very important part of our life.

We wake up in the morning by hearing alarms, or the chirping of birds.

Sound helps us to communicate with another person.

We talk and express ourselves by using sound.

We hear and listen to others with the help of sound. 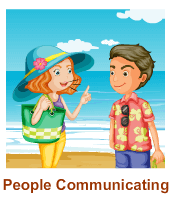 Let's discuss some sounds in our daily life.

A dog's bark lets us know that someone is coming.

A fire alarm warns us of a fire.

All these things show how important sound is in our daily life.

Have you ever thought about how are these sounds produced?

SOUND IS PRODUCED BY VIBRATIONS 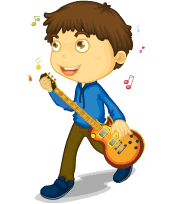 Let us understand what is sound, and how is it produced, by taking an example of a guitar.

What happens when we pluck the strings of a guitar?

What is producing this sound? Let us try to find out.

When a string of a guitar is plucked, it moves from one side to another in a back and forth motion or you can say it vibrates.

The continuously moving strings of a guitar shift the air particles in their respective directions. So, the vibrations of guitar strings set the surrounding air particles into vibrations, and this produces sound.

As the vibrations of the guitar strings come to a stop, the surrounding air particles also stop vibrating and we cannot hear any more sound being produced.

Now, let us see what happens when we hit the cover of a drum, called the membrane, with a drumstick.

The cover of the drum vibrates.

The surrounding air particles are also set into vibration, and as a result, sound is produced.

Let us see what happens when we blow air inside a flute or a trumpet. Here again, air particles vibrate and sound is produced.

So, sound is produced when an object vibrates.

Sound is a form of energy which is produced as a result of the vibrations of an object.

Now that you have understood what is sound and how it is produced, let us now talk about different sounds and some properties of sound.

First, let us compare the sound of a whistle with that of a drum.

You will notice that blowing a whistle produces a high sound, while a drum produces a low sound.

Do you know how we label such high and low sounds?

The pitch is the property of a sound which tells us how high or low a sound is.

Now compare the sounds produced by a violin and a human heartbeat.

You will realize that a violin produces a high pitch sound, while human heartbeat has a low pitch sound.

In a similar way, chirping of birds is a high pitch sound, while a lion's roar is a low pitch sound.

You will notice that whispering makes a soft sound but shouting for a friend across a playground makes a loud sound.

And a loud or soft sound is identified by its volume, another property of sound.

How Is Sound Produced?

Sound is very important in our daily life. It helps us in communicating with people or warning someone.

Sound is a form of energy which is produced by vibrating bodies.

C. Make your own Musical Instrument