A magnet is something that can attract certain metals.

It has an invisible force that pulls the metals to it. This force is called magnetism.

Magnets have many uses. They stick things on, hold things together, and make machines work.

Do you have magnets on your refrigerator?

Do your cabinets have magnets that hold the doors shut?

Do you have speakers in your home? These are made with magnets, too.

Did you know that almost every machine in your house has magnets in it?

Let's explore the world of magnets!

Where do we get magnets from?

Some rocks are natural magnets.

Here's a story about magnets: 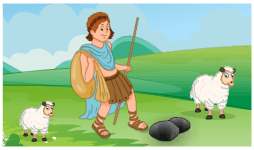 Long ago, a boy in Ancient Greece walked across a big rock.

There were iron nails in his shoes that kept them together. But as he walked across the rock, it pulled the nails right out. His shoes fell apart, and the nails stuck to the rock!

We don't know if this story is true or not.

But we do know that the word magnet comes from the name of a place, Magnesia, where some of these natural magnet rocks were found.

Does a magnet attract all kinds of metals?

No, there are only certain metals that are attracted to a magnet.

They are iron, nickel and cobalt. These metals can become magnets.

How do magnets work?

They can be bar magnets, horseshoe magnets, or ring magnets as shown in the picture below. (Notice the north and south poles in each type of magnet.)

You can see that different poles of a horseshoe magnet attract each other in the picture below.

The north pole of a magnet attracts the south pole of another magnet. (That means it pulls the magnet toward it.)

And the south pole of a magnet attracts the north pole of another magnet.

But magnets don't just attract. They can also repel, or push things away.

The poles that are the same repel each other. 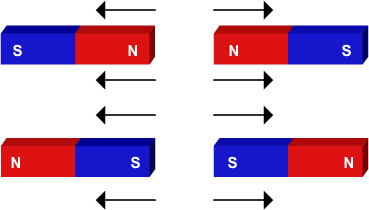 What is Magnetic Field?

The attraction and repulsion of a magnet is due to an invisible field around it, called the magnetic field. 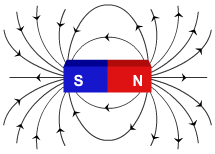 Is the strength of this magnetic field same everywhere in a magnet?

Let's find this out by bringing some iron filings close to a bar magnet. Now, observe carefully.

This shows that strength of this magnetic field is more at the ends and less at its center.

Earth as a magnet

Have you ever seen a compass?

A compass is a tool that helps people know which direction they're going.

The needle in the compass can spin.

The needle spins so that one end of the magnet points to the north and one to the south.

This works because the earth is like a big magnet!

There is iron inside the earth. That gives our planet its magnetic field.

They are natural light displays in the sky-almost like fireworks!

They can be seen in the areas around the north and south pole. They are caused by the Earth's magnetic field.

Sometimes the sun throws out a burst of energy.

These bursts get caught in the magnetic field around the earth.

They give off some beautiful, bright colors.

The Northern and Southern Lights are one of the ways we know that earth is a big magnet!

Magnets can pull through solids, liquids, and gases.

Magnets can pull through the earth's atmosphere.

GLOSSARY
Magnet:
something that can attract certain materials
Magnetism:
the force created by magnets
Poles:
the ends of a magnet
Attracts:
pulls toward itself
Repels:
pushes away from itself
Magnetic Field:
the area of a magnet's invisible power
Compass:
a tool that uses a magnet to help people know which direction they're going

A. Which one is a magnet?

B. What does a magnet attract?

C. Can a magnet work through objects?

D. The north and south poles of a magnet

E. Measure the strength of a magnet

View All
Sorry, we don't have any activities that match your specific requests.