What is a Compound Word?

Before you went to bed last night, did you brush your teeth?

If so, what did you use to brush your teeth?

Most likely you used a toothbrush.

The word toothbrush is made up of two words: TOOTH and BRUSH. It's a compound word.

Compound words are all around you. Maybe you take a bath in a bathtub, put your dishes in a dishwasher, or carry your books in a backpack. All of these are compound words too.

A compound word is a word made when you join two or more words to form a new word.

The words BIRTH and DAY are joined to make the word BIRTHDAY.

The words HEAD and ACHE are joined to make the word HEADACHE.

There are three forms of compound words:

Closed form compound words include words such as toothbrush, backpack, and birthday, where the two words are stuck together to make a new word.

Hyphenated form compound words includes words such as part-time, merry-go-round, and mother-in-law, where the words are joined together with a hyphen.

Open form compound words include words such as hot dog, ice cream, and North America, where an adjective is combined with a noun to create a word with new meaning, but the individual words still have a space between them.

When you form a compound word, you're combining two words to make a new word. This means that each part of the compound word has to be an actual word.

Take a look at the word SANDWICH which is made up of SAND + WICH. Sand is a word, but wich is not, so sandwich is not a compound word.

When the two words in a compound word are combined, they also get a new meaning.

So you wouldn't combine the words TURKEY and SANDWICH to create the word TURKEYSANDWICH because it would have the same meaning when combine.

You could, however, combine the words HOT and DOG to create the word HOTDOG, which becomes a type of food, not an actual dog that is hot.

You could combine the words South and America to make South America, which is a specific continent, not just the southern part of America.

You could also combine the words MOTHER, IN, and LAW to create the word MOTHER-IN-LAW, which is the name of your spouse's mother, not just a mother connected with the law.

How can you tell which form a compound word should use?

It can be kind of tricky and there's no way to always tell for sure, but here are a few guidelines to follow:

He added one-half cup of flour or the bright-eyed baby smiled.

I want to catch fireflies or we should go to the zoo sometime.

When in doubt, look in the dictionary to see how the word is correctly written. If it's not included in the dictionary as a closed form or hyphenated form compound word, then you should write it using open form.

Read each of the descriptions and see if you can guess which compound word should be used.

Want to know the answers?

How do you think you did? 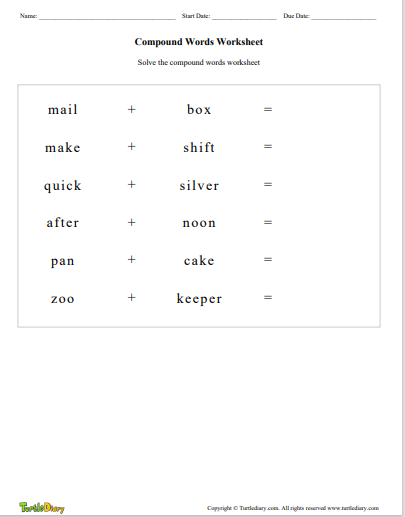 13 Downloads Grade 3 Choosing the Word with the Correct Prefix to Match...
Download Now!

15 Downloads Grade 3 Choosing the Word with the Correct Suffix to Match...
Download Now!