TurtleDiary Games and Flash
You have a pending invite. Click here for details.
-->
HOME
QUIZZES
ORDERING NUMBERS
COMPARE NUMBER UP TO BILLIONS
Upgrade to remove ads
Go Ad-Free
Report Ad
Upgrade to remove ads
Go Ad-Free
Report Ad
4,828 Plays
You are not logged in! Track your progress and more. TurtleDiary.com is FREE!
Your Quiz Progress is not being saved as you are logged-in with a Parent/Teacher Account.
Login or Sign Up Free
Download
Add to favorites
Rate Quiz 0 stars
Assign   Assign
Close
Login as parent/teacher to assign this.
Common Core
Give Feedback
Quiz size:
Message preview:
Someone you know has shared Compare Number up to Billions quiz with you:

What did you think of Compare Numbers up to Billions ? 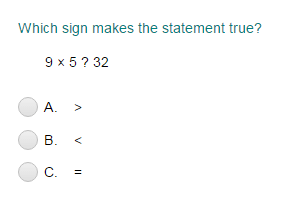 Compare Number up to Billions

To compare two numbers, first count their number of digits.

1. If the numbers have unequal number of digits, then the number with more digits is greater.

2. If the numbers have equal number of digits, then compare the two numbers digit by digit starting from the digit in the highest place value.

Notice that both the numbers have four digits.

Let’s write these numbers in a place value chart.

So, we compare the tens digits.