Add to Fav Rate 0 stars
Sport size:
Message preview:
Someone you know has shared Basketball sport with you: 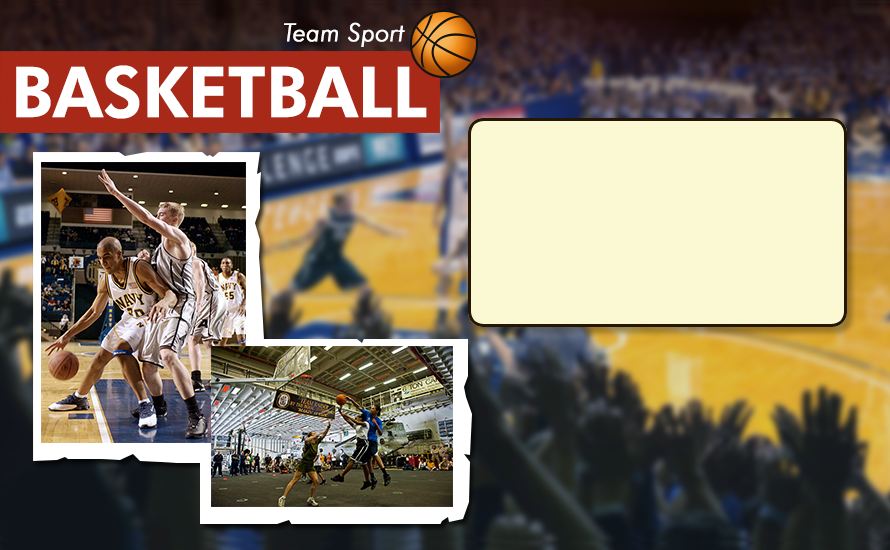 Did you know? In 1967, slam dunks were illegal! Nine years later, they became legal again.

What is BASKETBALL anyway?

Basketball is a team sport played with a ball and a hoop. Teams try to earn points by throwing the ball into the hoop. 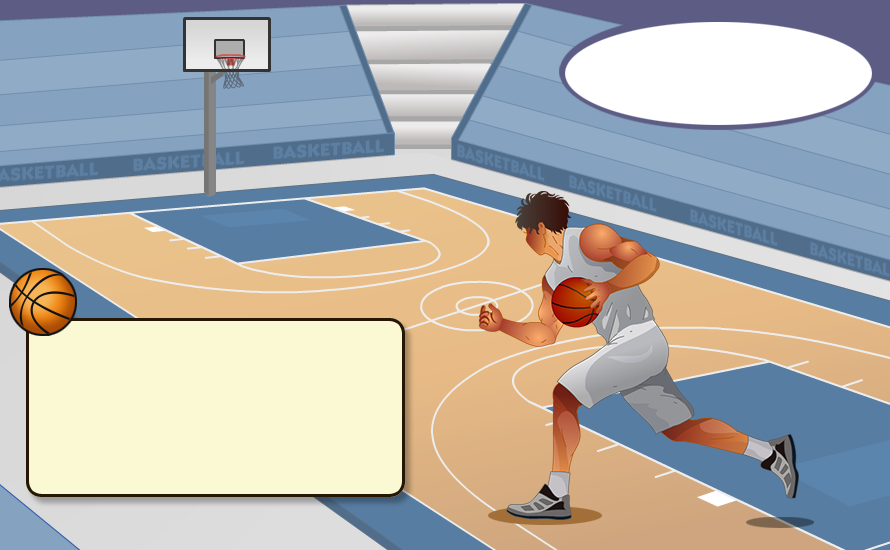 What is a basketball player's favorite desert?

James Naismith was a Canadian gym teacher who invented the game of basketball in 1891. 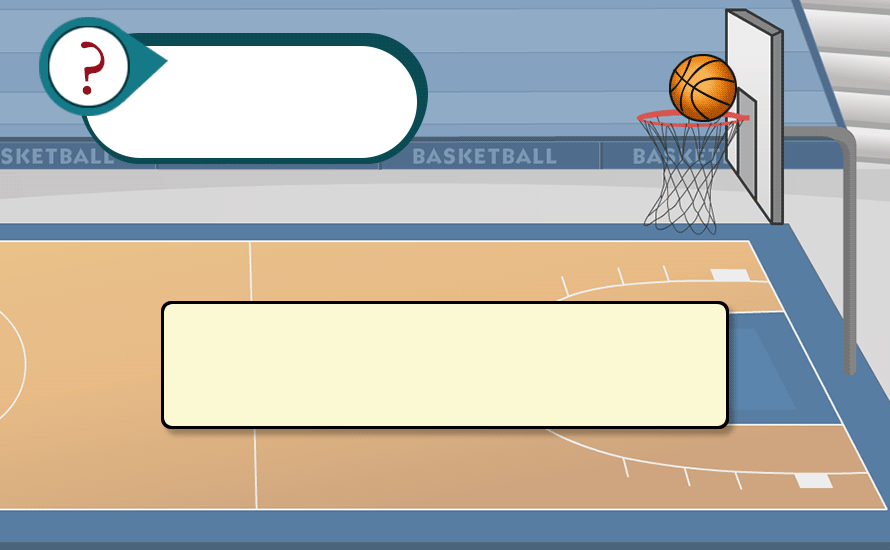 Nov 6, 1861 - Nov 28, 1939
Well, he actually created the game with - Basketball kept children active during the winter months when they could not play outside. 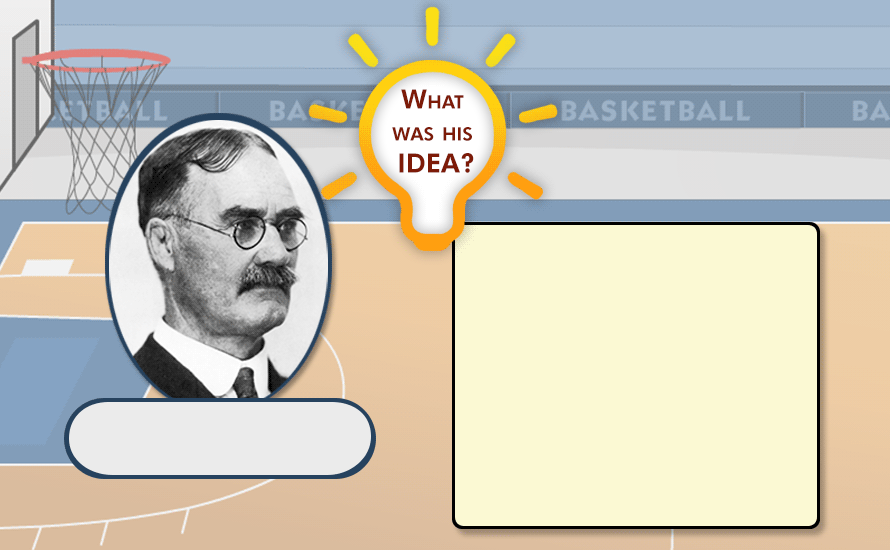 Equipment: What do you need to play BASKETBALL?
Did you know? The first basketball was brown. In the 1950's, players started using an orange ball because it was easier to see. 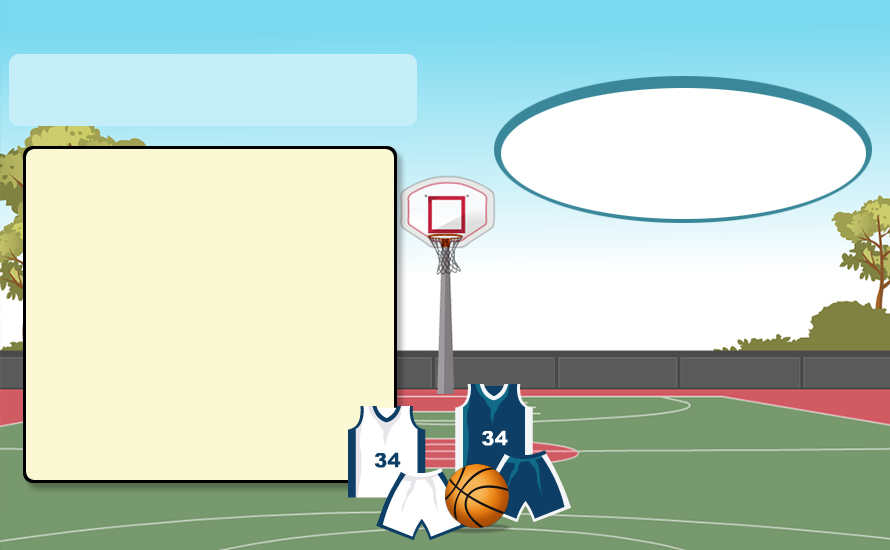 Why was Cinderella thrown off the basketball team?

Because she ran away from the ball! 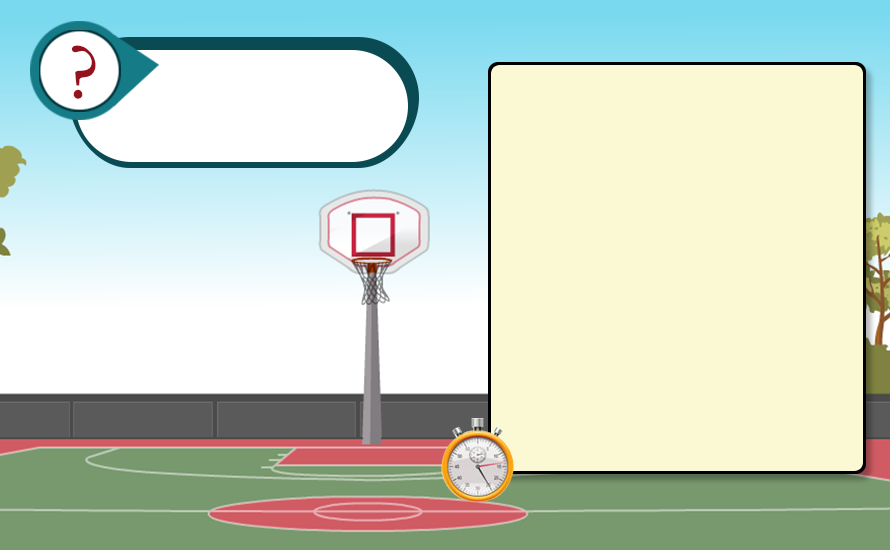 Team Line-Up: What are the POSITIONS?

Centers are usually the tallest players on the team. Centers play closest to the basket. They are good at finishing shots on offense and blocking shots on defense.
Did you know? Kareem Abdul has the record for most points in a career. Over 20 years, he scored 38,387 points. Wow! 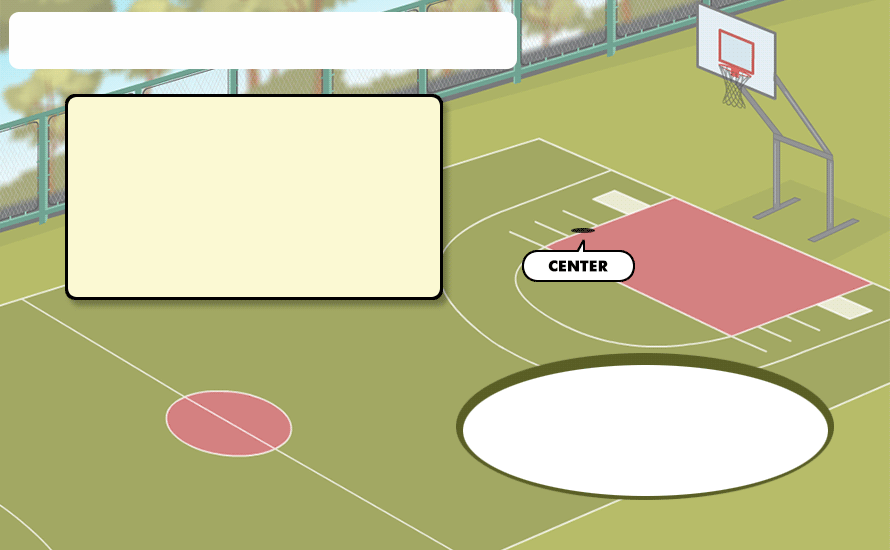 Forwards can play close to the hoop, in the corner areas, and other parts of the court. Forwards should be good at many different basketball techniques. There are two kinds of forwards: 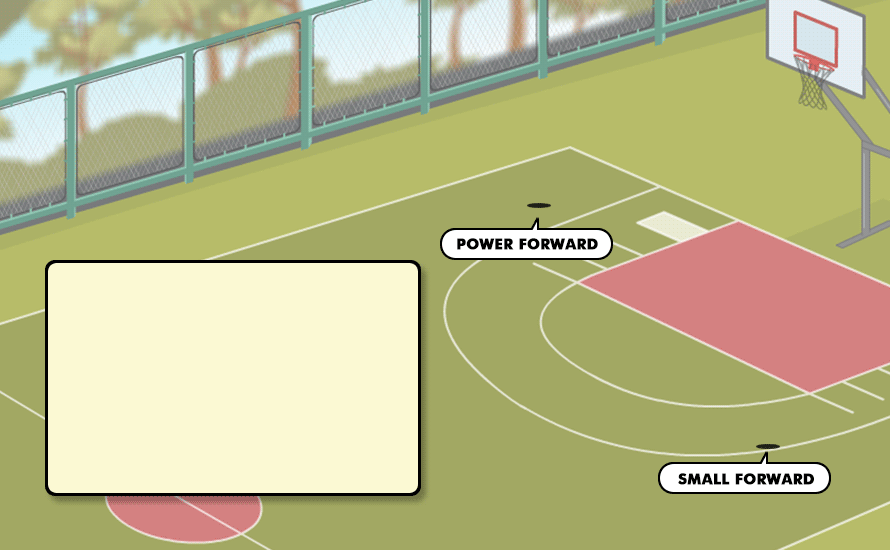 The power forward plays close to the basket and tries to make easy jump shots. Power forwards are also good at getting rebounds on offense and defense.

The small forward is a good shooter and helps the power forward. 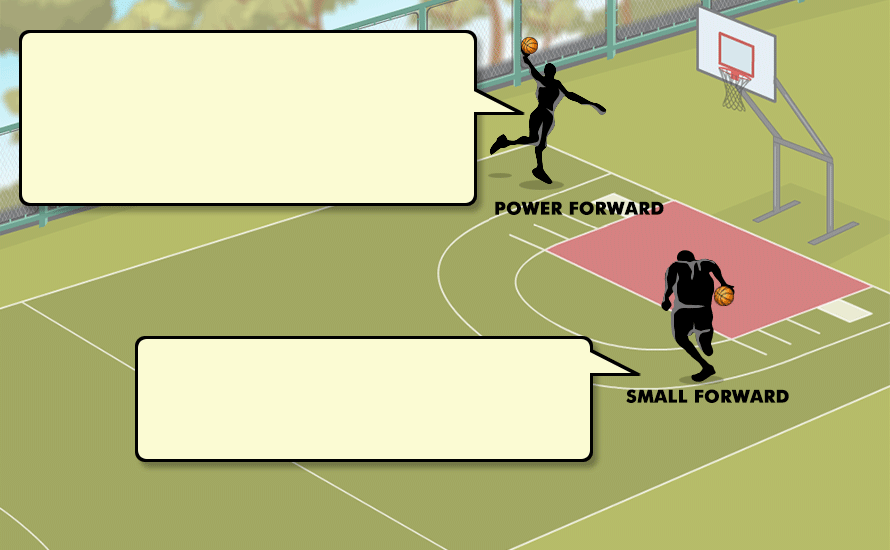 The guards are usually the shortest players. Guards are good at dribbling, passing, and setting up plays for the offense. Guards are often very fast. There are two kinds of guards: 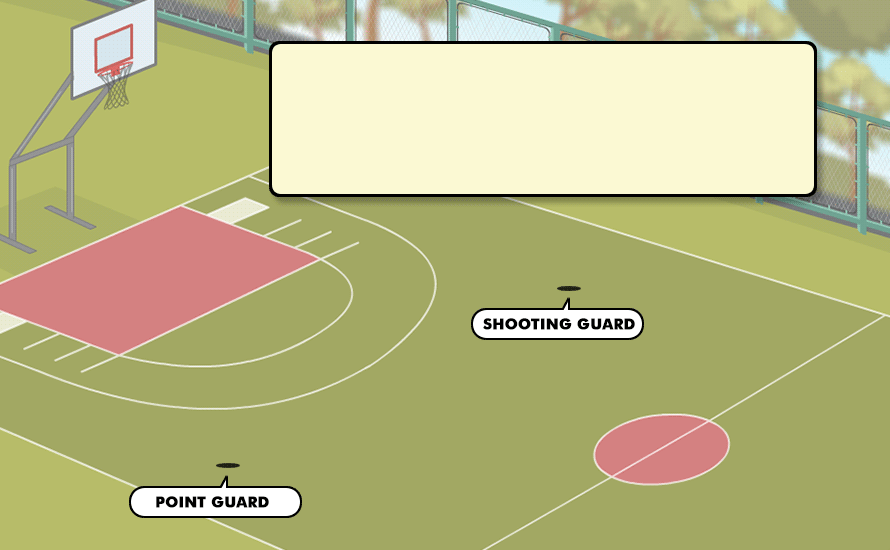 The shooting guard is usually one of the best outside shooters. This player can shoot 3-point shots very well. 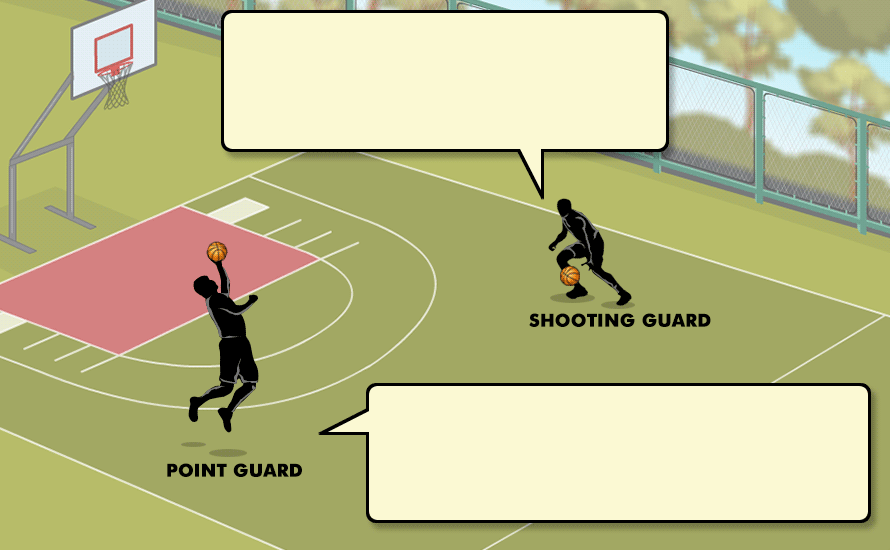 RULES: How do you play BASKETBALL?

Moving down the court:

Players can pass or dribble the ball to move it down the court.

Passing is when you throw the ball or bounce the ball to another player.

Dribbing is when you bounce it up and down. 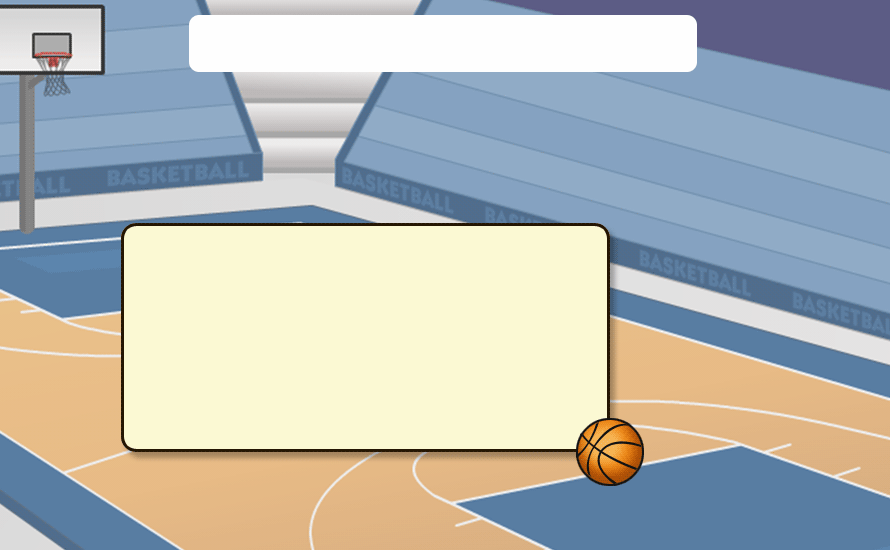 Players cannot walk with the ball - that is traveling.
The player must dribble the ball while moving around the court. If a players stops dribbling, he must keep one foot in place and pivot (or move) on the other foot. If a player travels, the other team gets the ball. 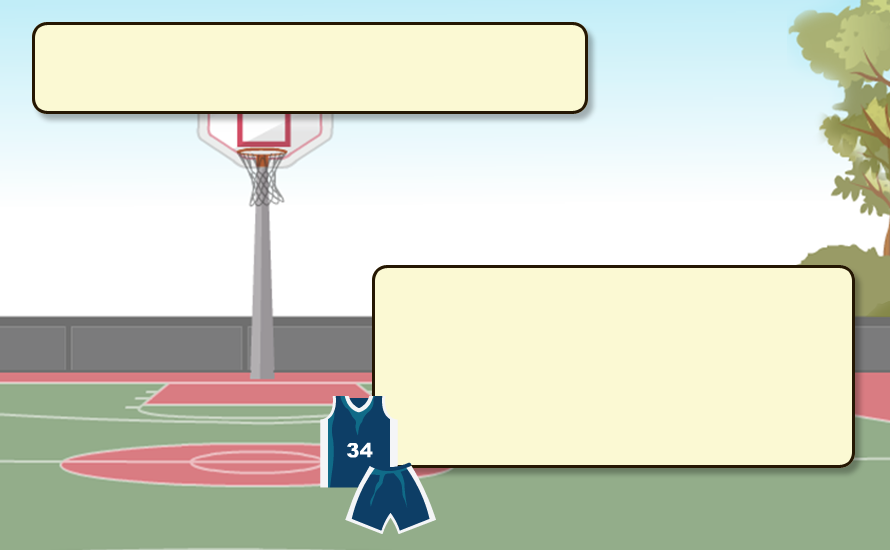 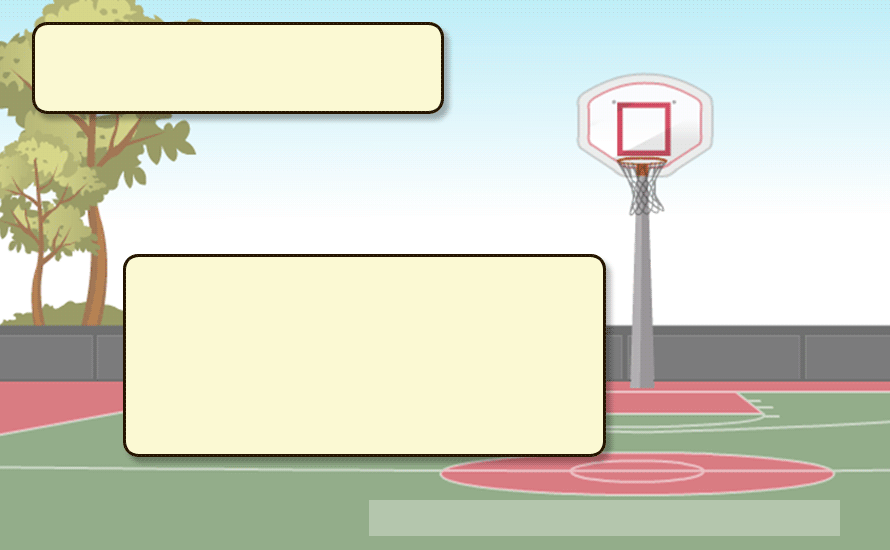 Why do basketball players stay so cool?

Because they have so many fans!

The team without the ball is the defense.
They try to steal the ball, block shots, and get the rebound when the offense misses a shot. 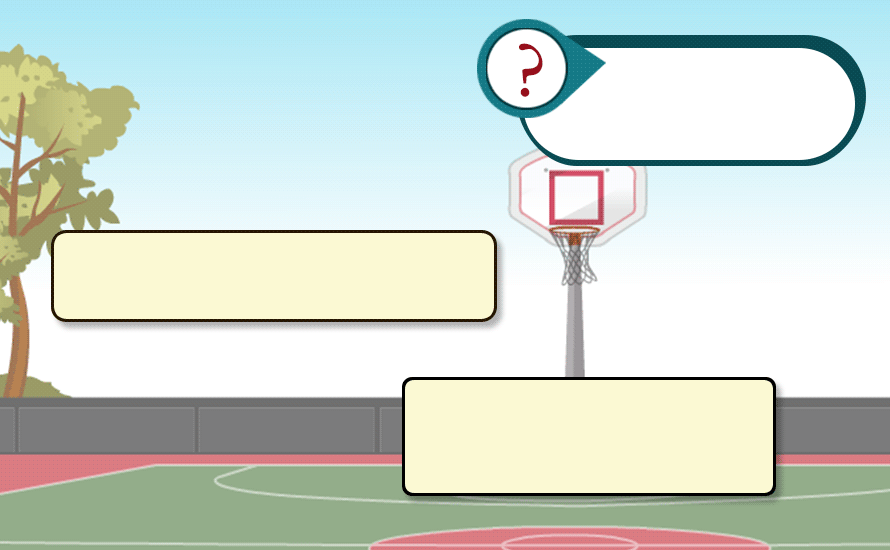 Players can steal the ball by touching only the ball.
If one player touches, hits, or runs into another player while trying to steal, block, or dribble the ball, the referee may call a foul. If a foul happens when a player is shooting the ball, he gets a foul shot. 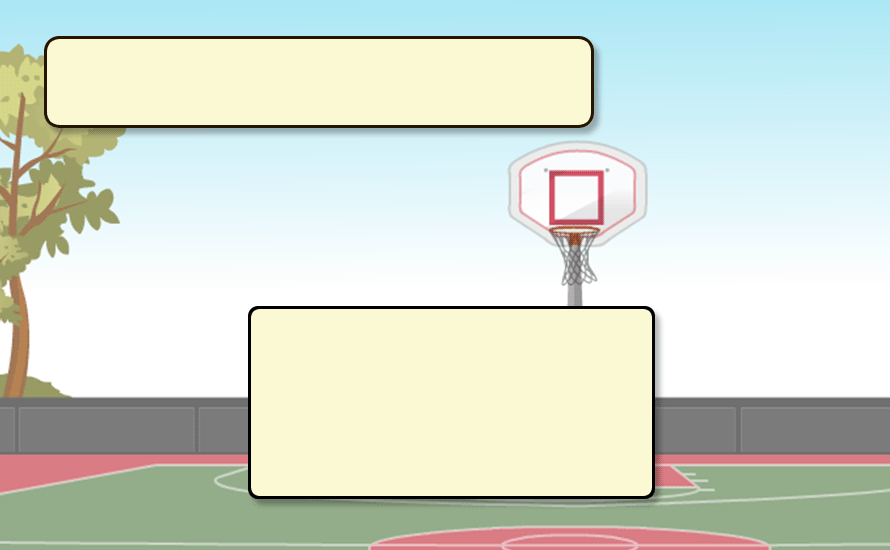 Obviously, the team with the most points wins! 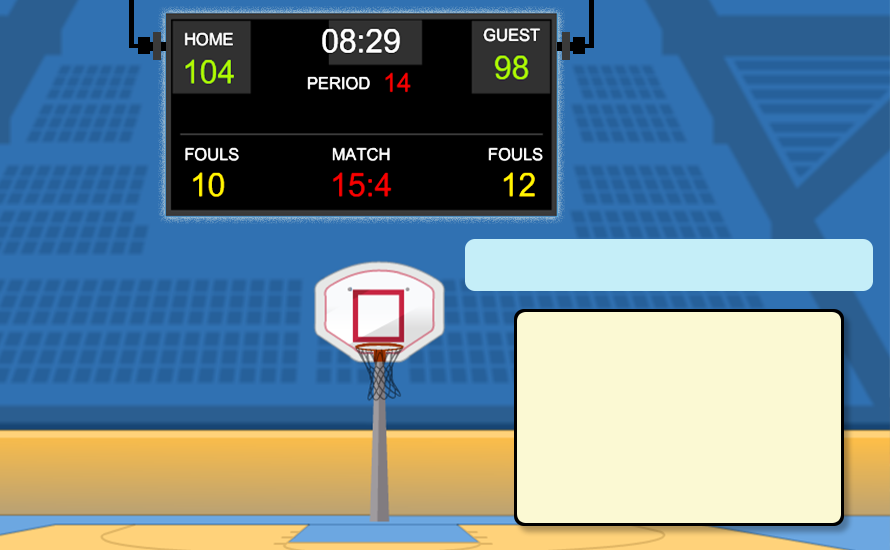 The COURT and the HOOP

• The foul line is 15 feet from the front of the basket.

• An arc that extends from the foul line is 6 feet and serves as part of the key. 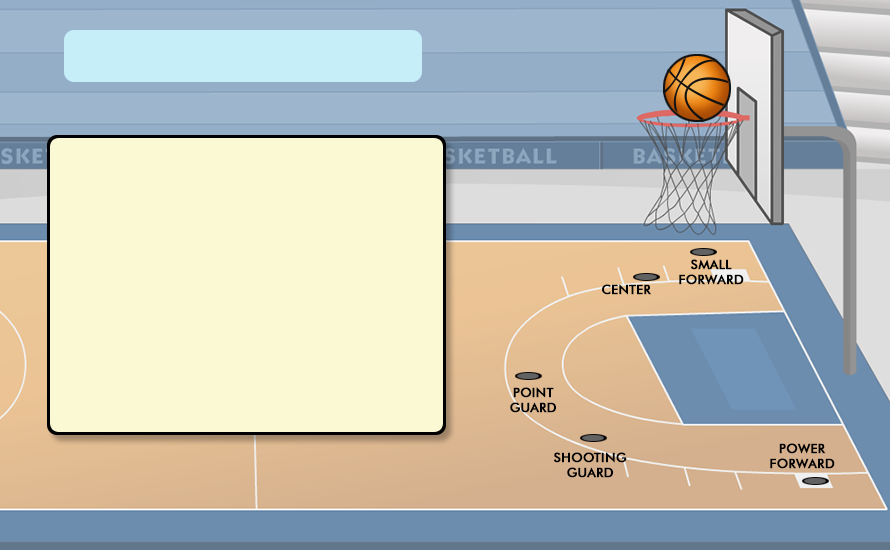 Did you know? There is a Basketball Hall of Fame in Springfield, Massachusetts. It was the site of the first basketball game!

• The top of the 3-point arc is 22 feet from the center of the basket rim and extends in an arc near the sidelines. A shot from behind the arc line is worth 3 points!

• The backboard is 6 feet wide and 42 inches tall.

• The basketball hoop is 18 inches in diameter. 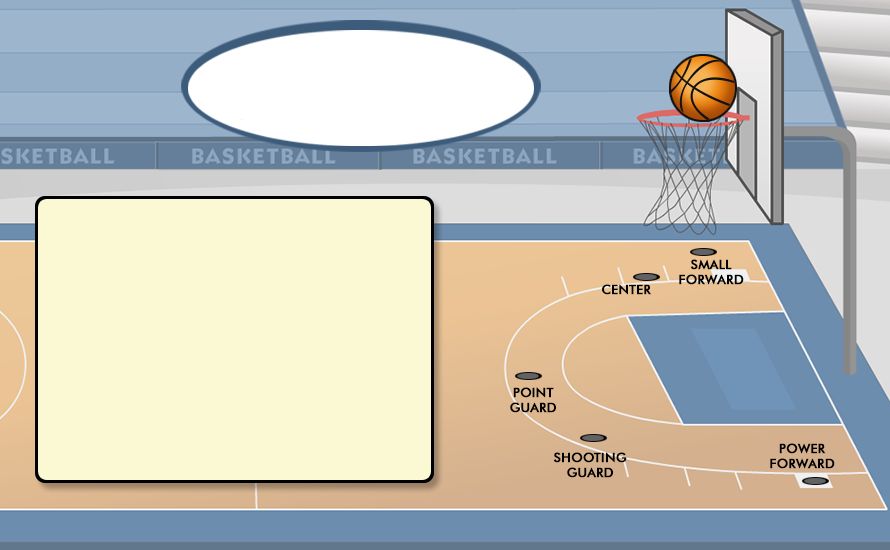 1897 - The first professional game was played. Players dribbled for the first time.

1910 - The court had glass backboards for the first time.

1962 - Wilt Chamberlain scored 100 points in one game. He was over 7 feet tall and was a talented player at the center position. 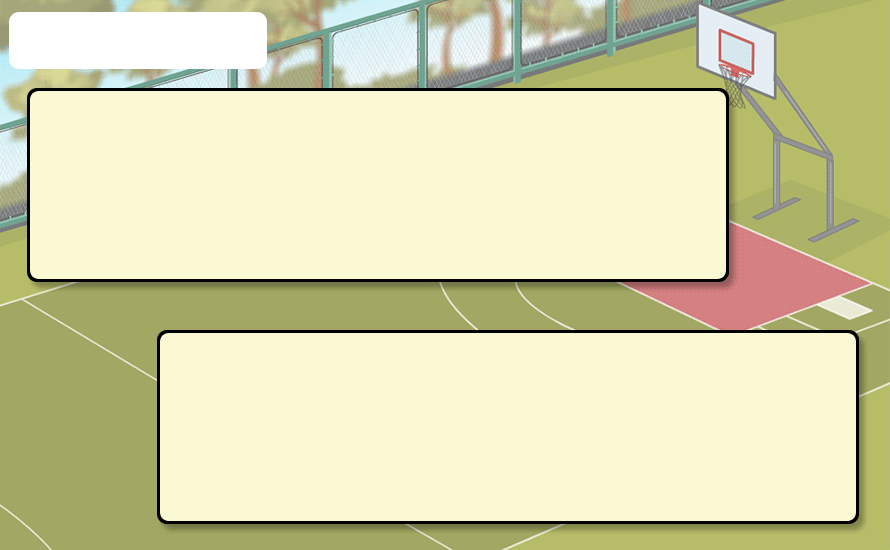 1969 - Kareem Abdul-Jabaar began his NBA career with the Milwaukee Bucks. He was eventually the NBA's all team leading scorer with 38,387 points.

1972 - Julius Erving began his NBA career with the Milwaukee Bucks. His play Involved new techniques like leaping above the rim of the hoop.

1978 - Larry Bird began his NBA career with the Boston Celtics. He has also been a coach and is in the Basketball Hall of Fame.

1979 - Magic Johnson began his NBA career with the LA Lakers. He won the MVP award as a rookie. He is the NBA's all-time leader in average assists per game.

1981 - Isiah Thomas began his NBA career with the Detroit Pistons. He played point guard and is one of the 50 greatest players in history. 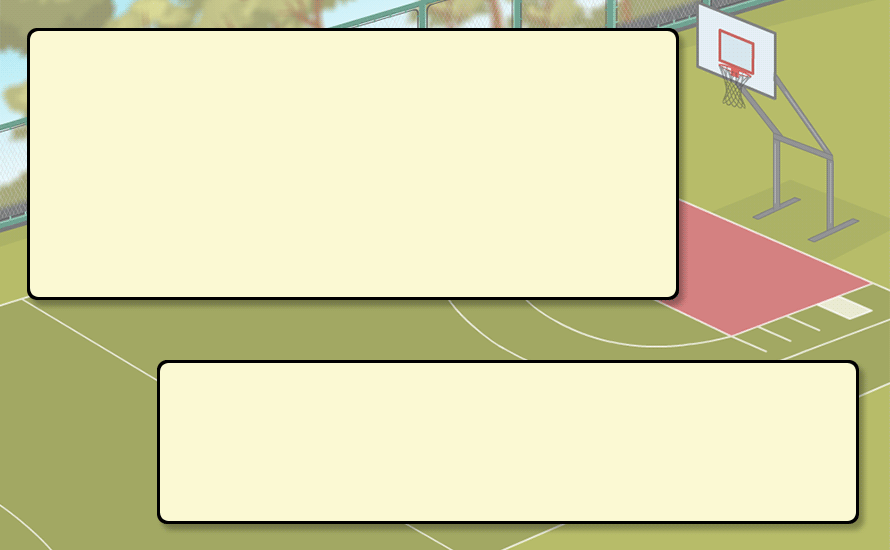 1996 - Kobe Bryant began his NBA career with the Charlotte Hornets. He is a shooting guard, he has been an All Star fifteen times, and he won the All- Star MVP four times. He is the youngest player to reach 30,000 points.

2000 - The men's team and the women's team win first place in the Olympics. 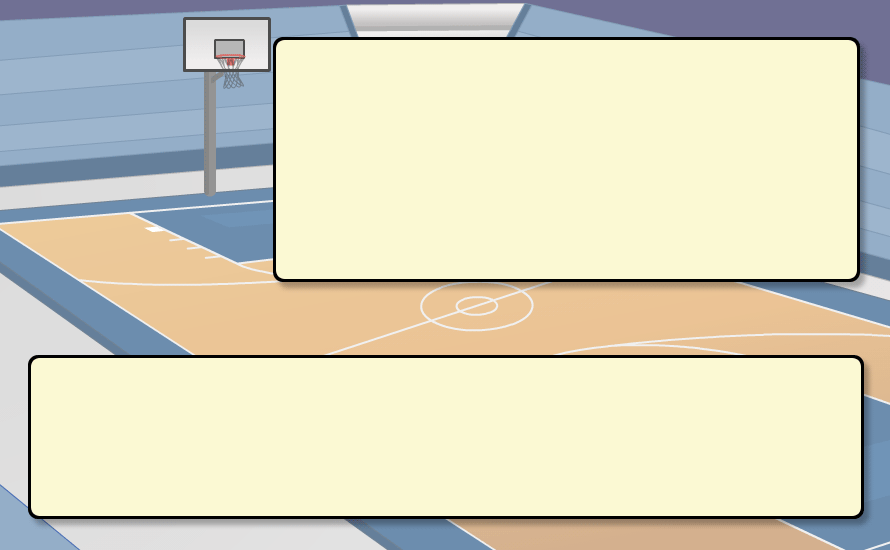 2003 - LeBron James began his career with the Cleveland Cavaliers. He was the all-time leading scorer for the Cavaliers and he was the youngest player to reach 20,000 points in his career. He has been the NBA MVP three times and he has won one championship. 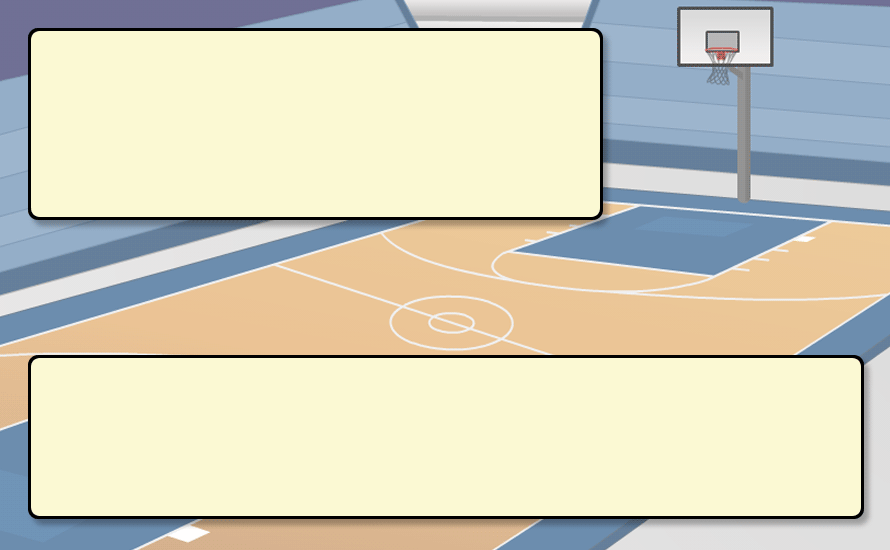 2006 - Dwayne Wade was MVP of the NBA finals and was named Sportsman of the Year. He is the all-time leading scorer for the Miami Heat, and has won two championships.

2011 - Derrick Rose was the youngest player to receive the award for league MVP, and was Rookie of the year when he started. He was a point guard and led his team to the finals since he started in 2008.

2012 - LeBron James was league MVP for the third time, and won his first championship with the Miami Heat. 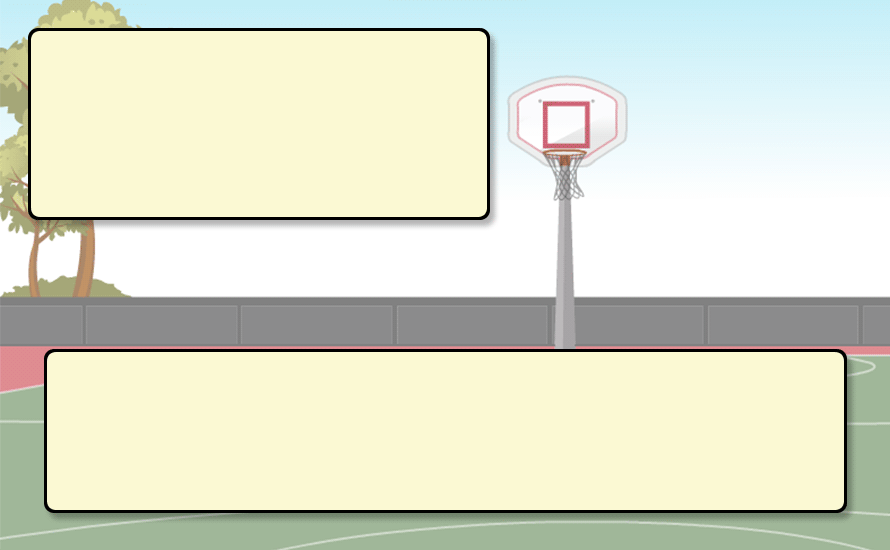 Erving changed the game of basketball. He could spin in mid-air. He perfected his slam dunk. Erving won the MVP Award three times. He won two League Championships. He is one of the leading scorers of all time.

Feb 22, 1950
This file is licensed under the Creative Commons Attribution 3.0 Unported license. 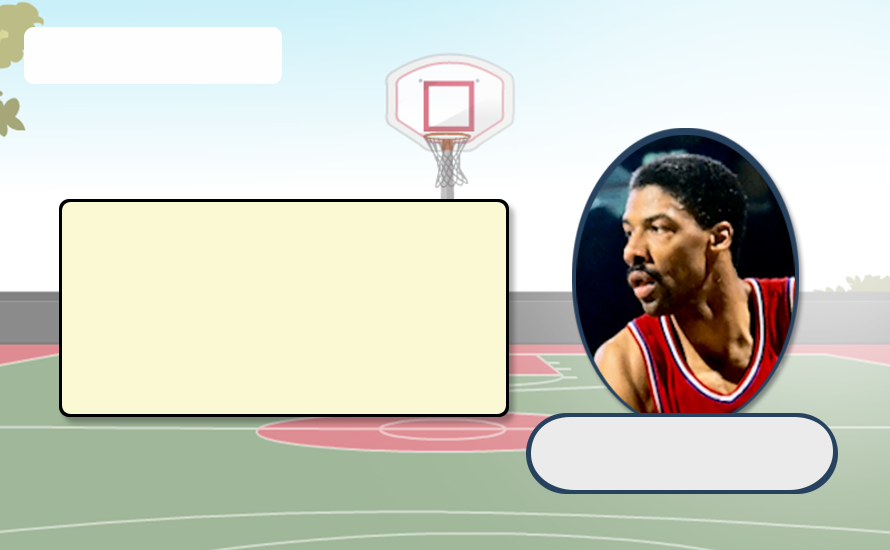 Dec 7, 1956
This file is licensed under the Creative Commons Attribution 3.0 Unported license.

Larry Bird led the Boston Celtics to 12 NBA finals and his team won the championship three times. Bird also made the All Star Team 12 times and was the MVP of the All Star Team in 1992. Bird won three MVP awards. He averaged 24 points per game. He was the fifth best free thrower of all time. 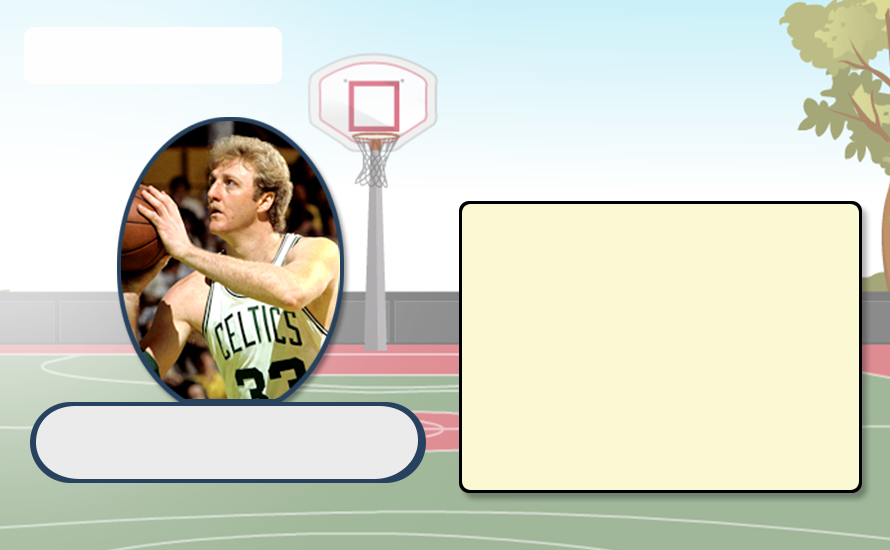 Aug 14, 1959
This file is licensed under the Creative Commons Attribution 3.0 Unported license.

Johnson played his whole career with the Los Angeles Lakers. He was a member of five championship teams. He won the season MVP three times and the finals MVP three times. He played for the All Star Team 12 times. He amazed fans with his incredible passing skills. 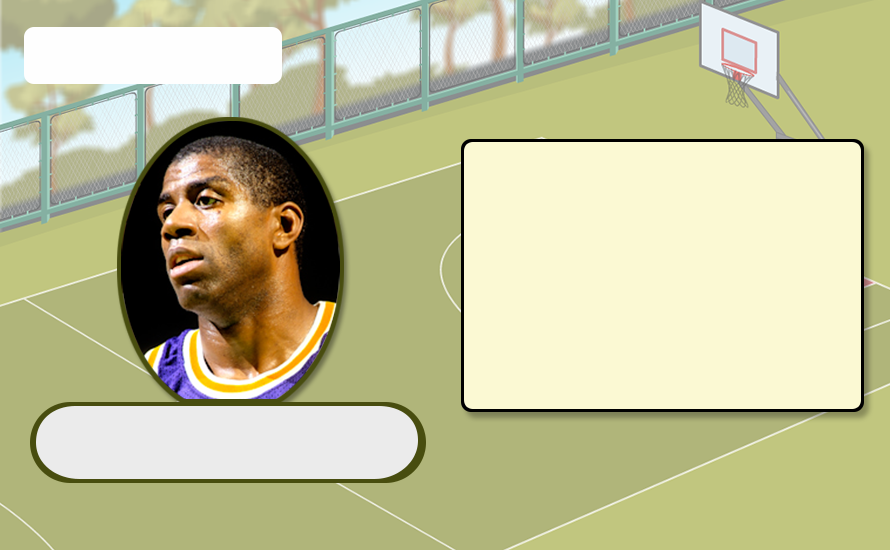 Jordan was an incredible shooter, jumper, dunker, and a skilled defender. Jordan and the Bulls won the NBA Championship six times. Jordan was the MVP five times. Jordan was on the All Star Team 14 times. He is one of the most talented basketball players of all time.

Feb 17, 1963
This file is licensed under the Creative Commons Attribution 3.0 Unported license. 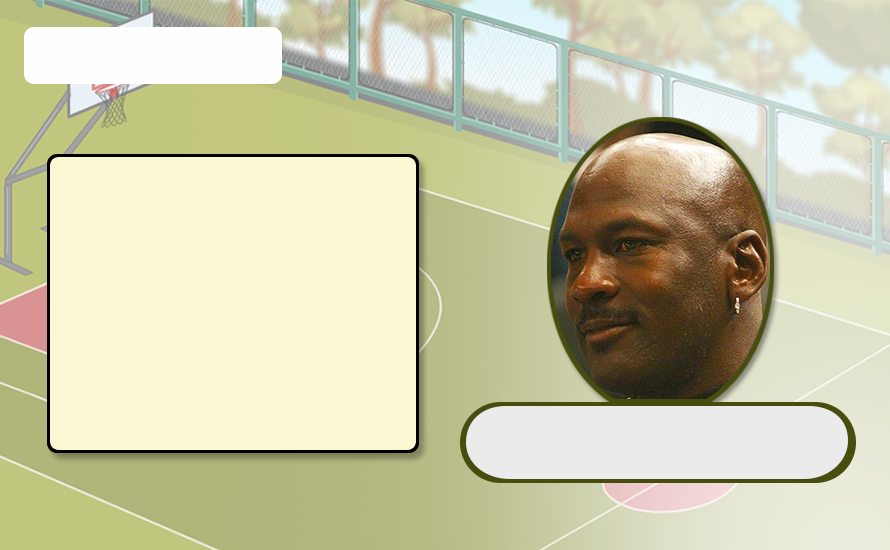 It is one of the world's most popular and well-established sports.Originated in Canada, this amazing game is played between two teams of five players each. In this game, teams try to earn points by throwing a ball into the hoop.