Add to Fav Rate 0 stars
Sport size:
Message preview:
Someone you know has shared Golf sport with you: 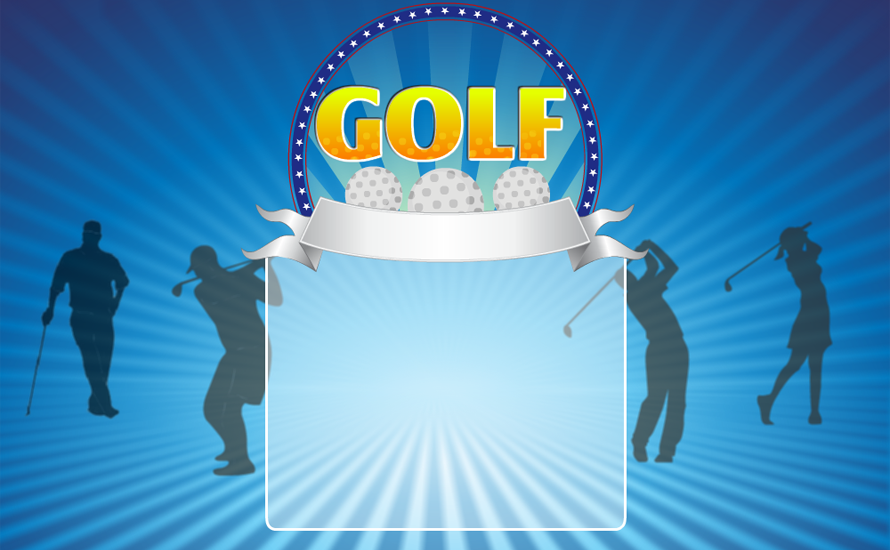 Golf is an individual sport that requires players to use golf clubs and a ball. Golfers use different types of clubs to hit the ball into a series of holes on a course. The goal is to get the ball in each hole with the fewest number of strokes. 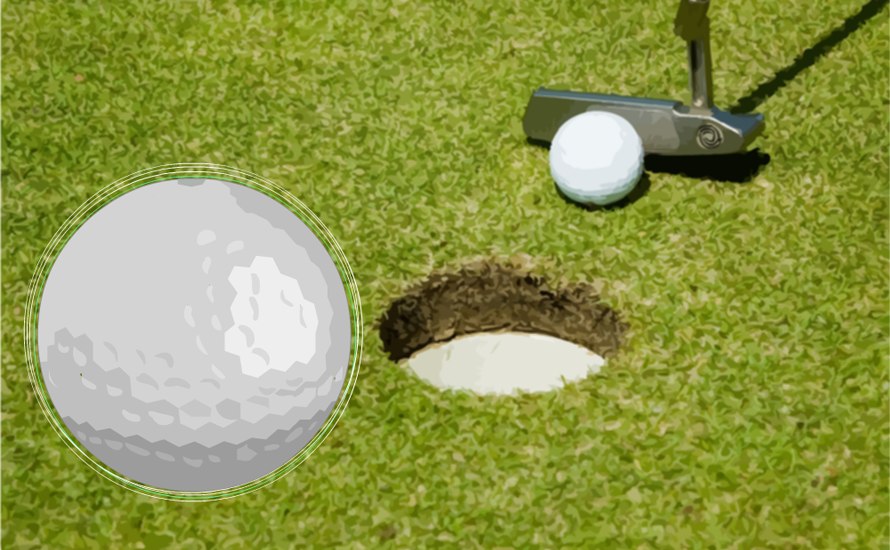 Recent evidence suggests that people played a game like golf in China since Southern Tang Dynasty (937-975) and during the Song Dynasty (960-1279). The game was called chuíwán and was played with 10 clubs, which were a lot like a driver, two-wood, and three-wood. 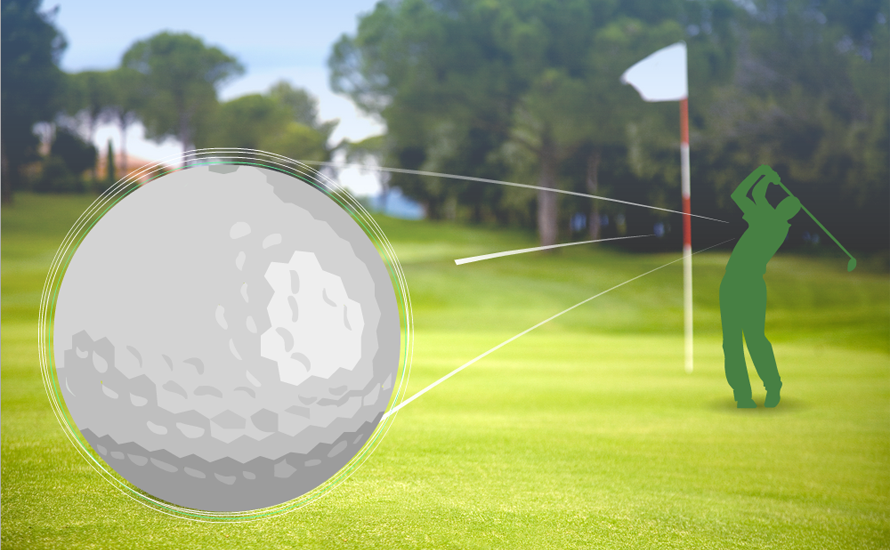 In 1297, people played a golf-like game in the Netherlands. The Dutch played the game with a stick and leather ball. The winner was the player who hit the ball at the target in the least number of strokes.
Did you know...? There are 336 dimples on a regulation golf ball. 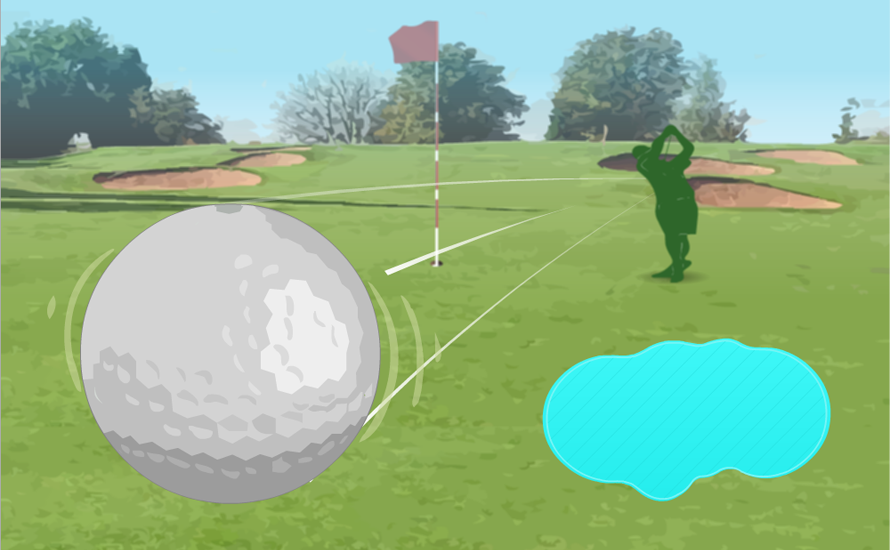 People played the modern form of golf in Scotland during the 1400's.
Did you know...? The chances of making two holes-in-one in a round of golf are one in 67 million. 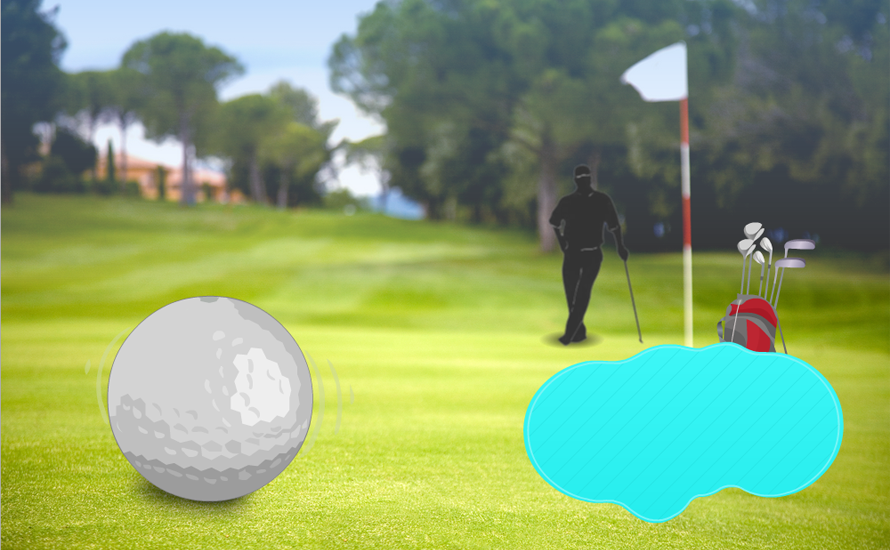 The Driver – Golfers use this club for teeing off at each hole. The first stroke on each hole is the drive.

The Hybrid Club – Golfers use this club for hitting shots 150 yards or more through the air.

The Wedge – Golfers use the wedge for hitting short, high shots from near the green or in the sand. 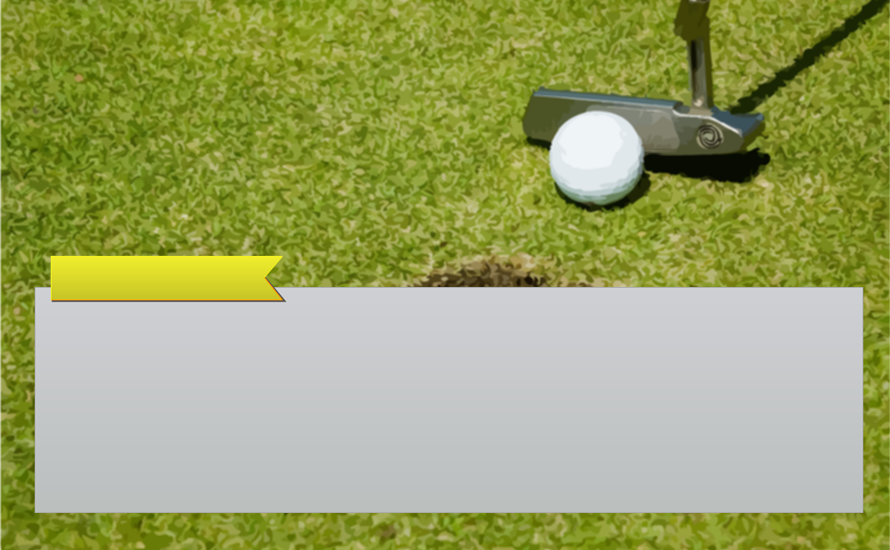 The Putter – Golfers use the putter for tapping the ball into the hole when it is on the green and very close to the hole.

Caddy – A caddy is an assistant to the golfer. The caddy carries the clubs and assists the golfer with advice and support.

Ace – An ace is a hole in one. The golfer hits the ball into the hole on one stroke.

Albatross or Double Eagle – An albatross is a hit that is three strokes under par on a hole. 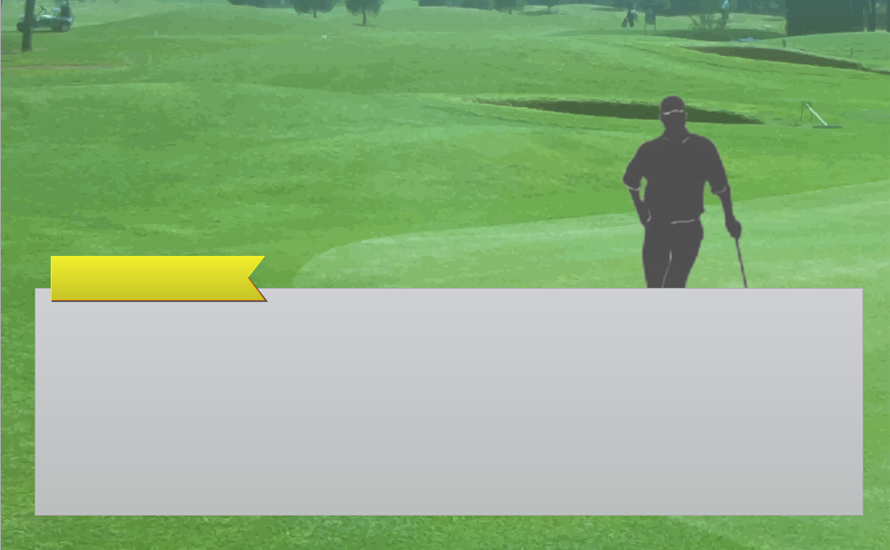 Eagle – An eagle is a hit that is two strokes under par on a hole.

Birdie – A birdie is a hit that is one stroke under par on a hole.

Par – Par is the score a good player would expect to make on a hole or round.

Bogey – A bogey is one stroke over par on a hole.

Double Bogey – A double bogey is two strokes over par on a hole.

Fairway - The fairway is the area of the golf course between the tee and the green. 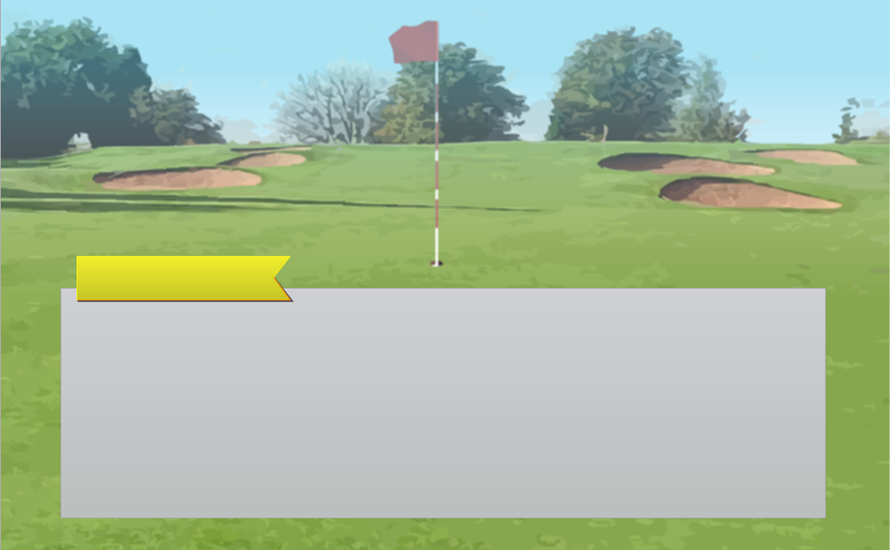 Fore – Golfers shout, “Fore!” when there is a chance that the ball may hit other players or spectators.

Grand Slam – A grand slam happens when a golfer wins all of golf's major championships in the same calendar year.

Handicap - A number assigned to each player based on his ability. The number adjusts each player's score so the players are equal to each other. 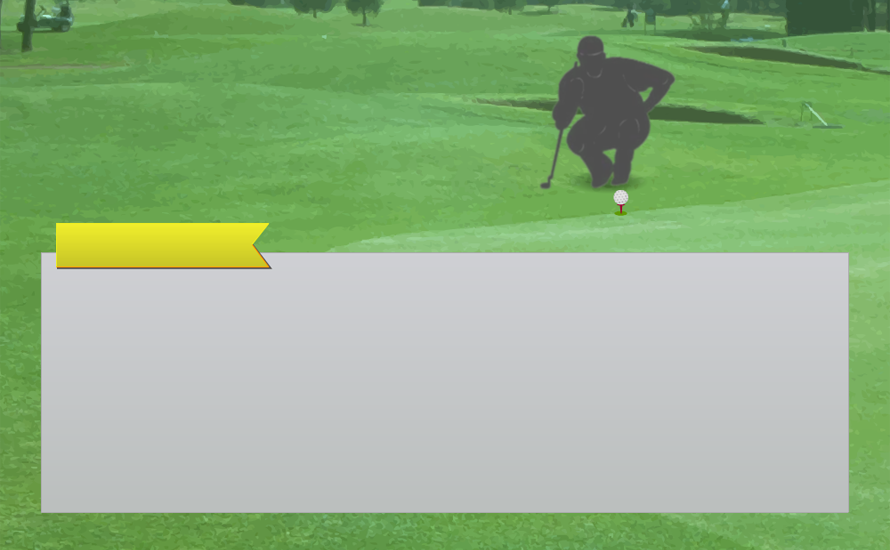 Joke Why do elephants need trunks?
To carry all their golf clubs!

Slice - A shot that initially takes a trajectory on the same side of the golf ball from which the player swings but eventually curves sharply back opposite of the player.

Swing - The movement a golfer makes with his or her body and club in order to hit the ball.

Tee - A small peg, usually made of wood or plastic, placed in the ground. Golfers can place the ball on the tee prior to the first stroke on a hole. 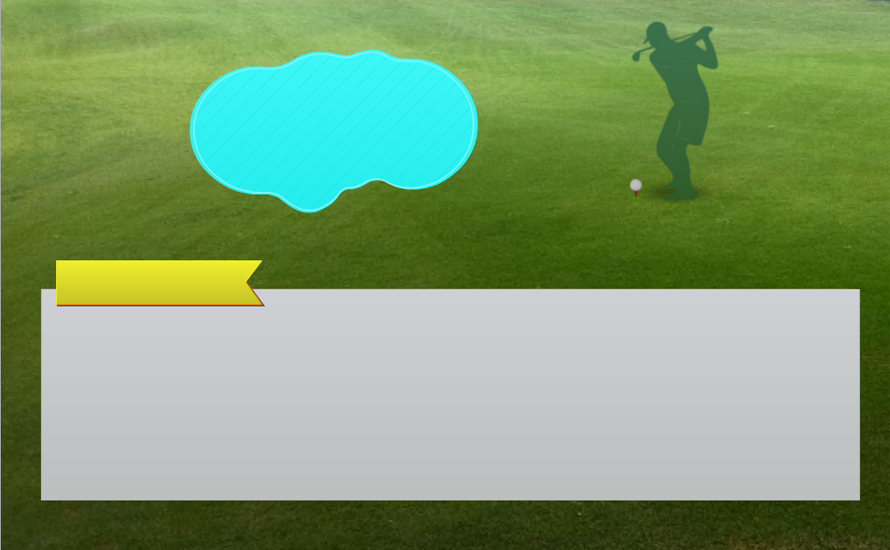 Whiff – A golfer’s attempt to strike the ball that ends in a miss. A whiff counts as one stroke.

Course – A golf course consists of a series of holes, each with a teeing ground that is set off by two markers showing the bounds of the legal tee area, fairway, rough and other hazards, and the putting green surrounded by the fringe with the pin (normally a flagstick) and cup. 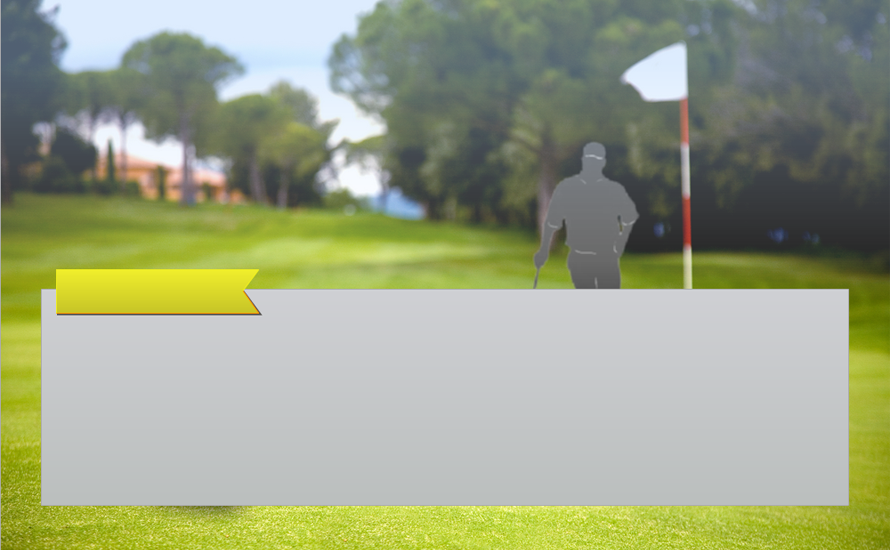 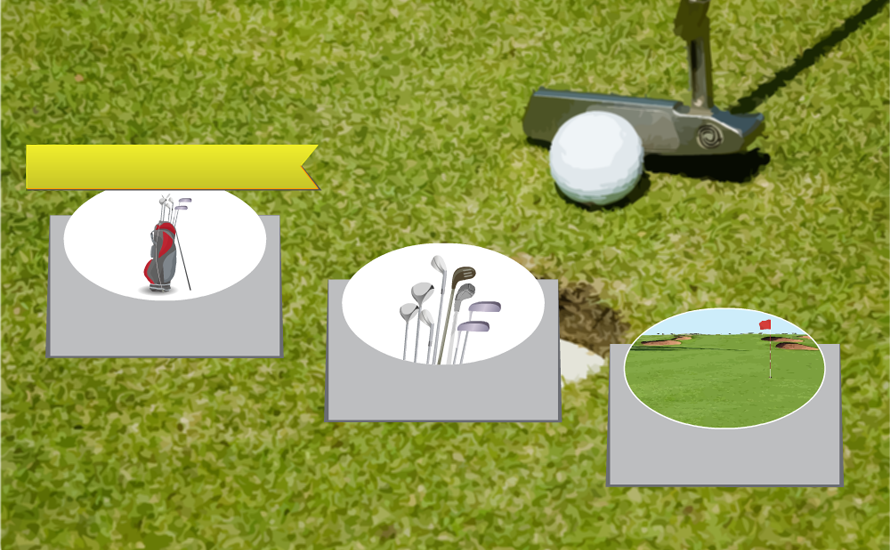 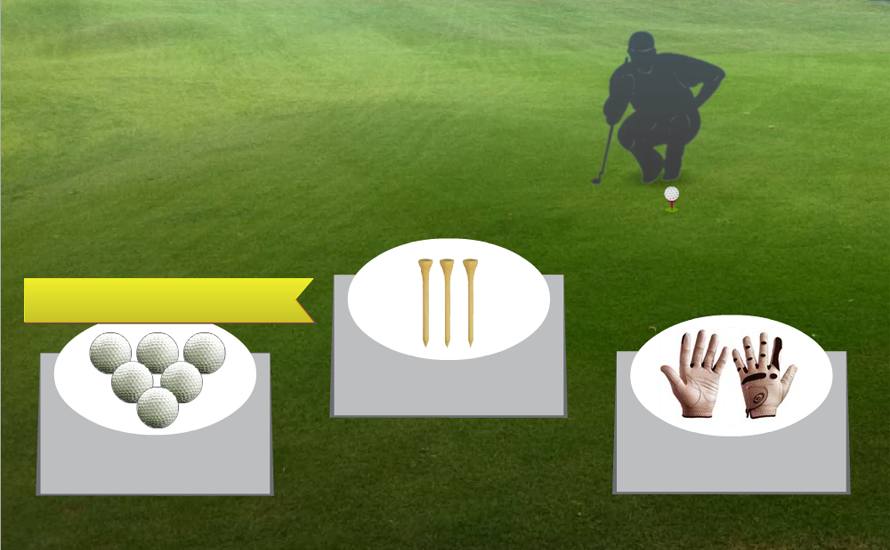 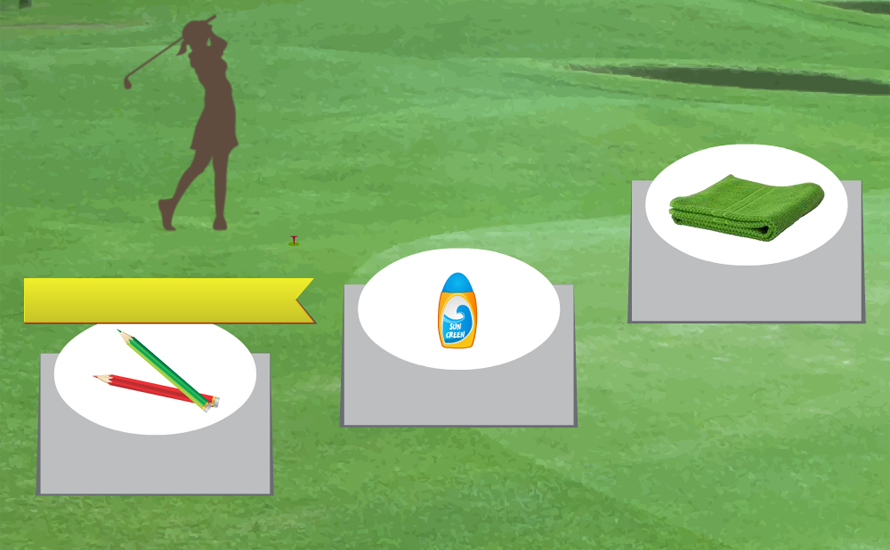 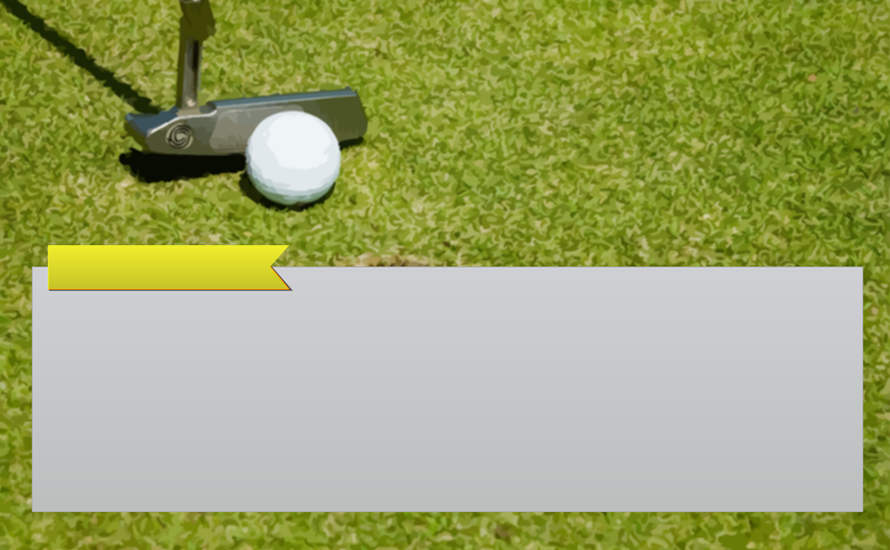 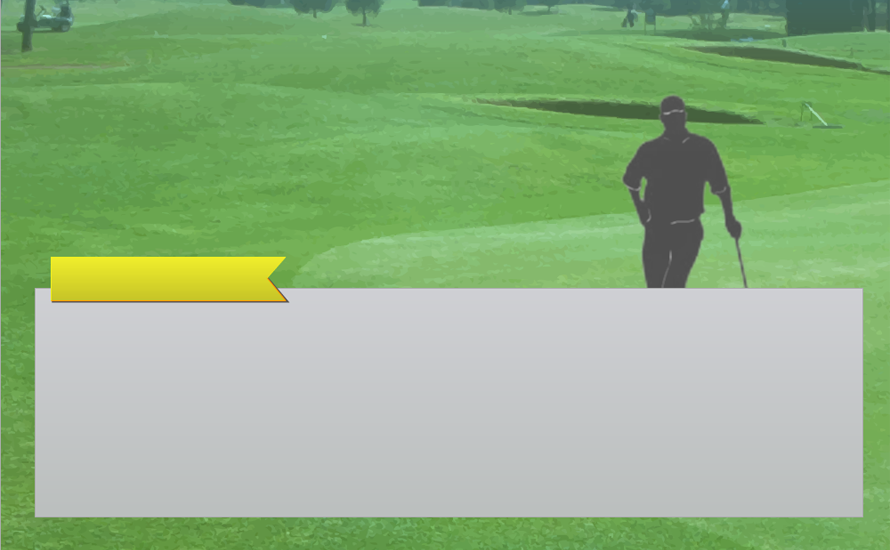 Did you know...? Tiger Wood got his first ace when he was just 8 years old. 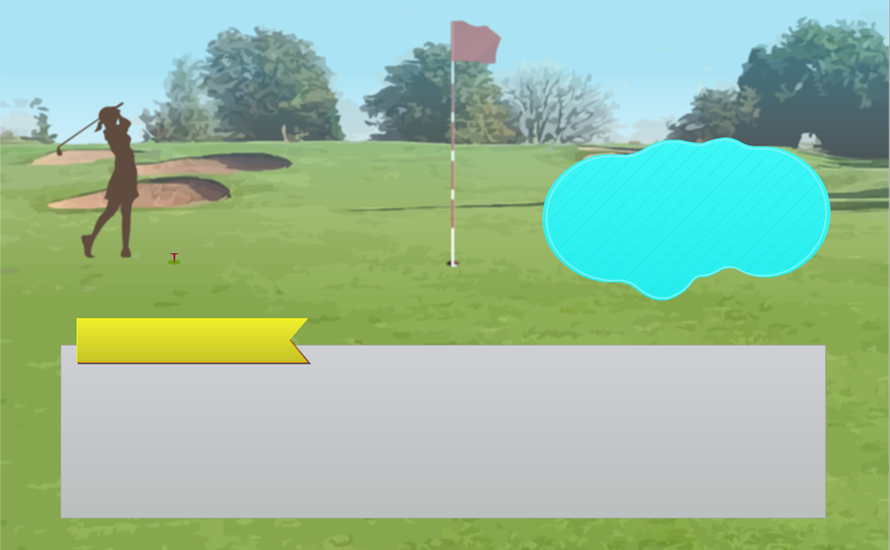 Sometimes golfers receive penalties. Extra strokes are added to the player's score for rule infractions or for hitting the ball into an unplayable situation. 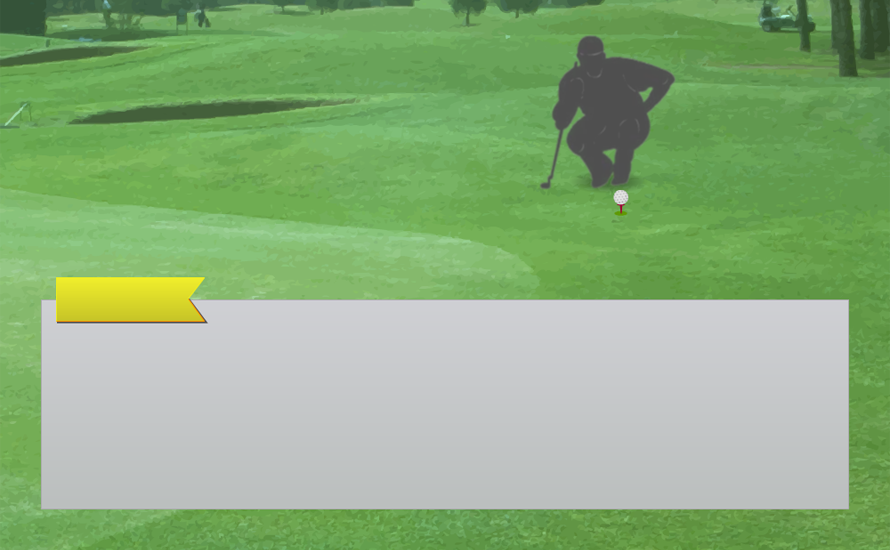 Joke Why did the golfer bring an extra pair of pants to his golf game?
In case he got a hole in one! 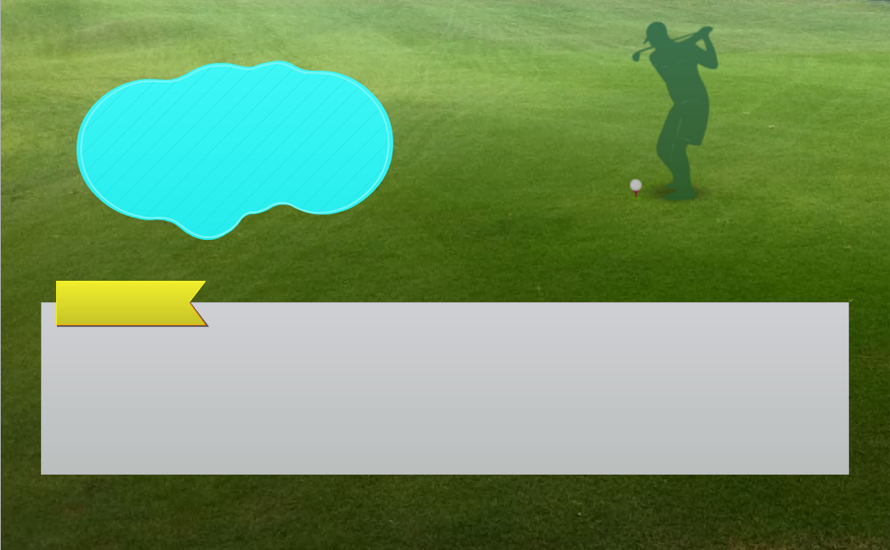 What to do after a Penalty…

Out-of-bounds – Player receives a two-stroke penalty (the stroke you hit plus one penalty stroke). The golfer drops the ball at the spot of the last shot, and continues play.

Whiff - Count each time the player swings at the ball. Continue playing until the golfer hits the ball.

Unplayable lies – Player receives a one-stroke penalty. The golfer drops the ball at the spot of the last shot, and continues play. 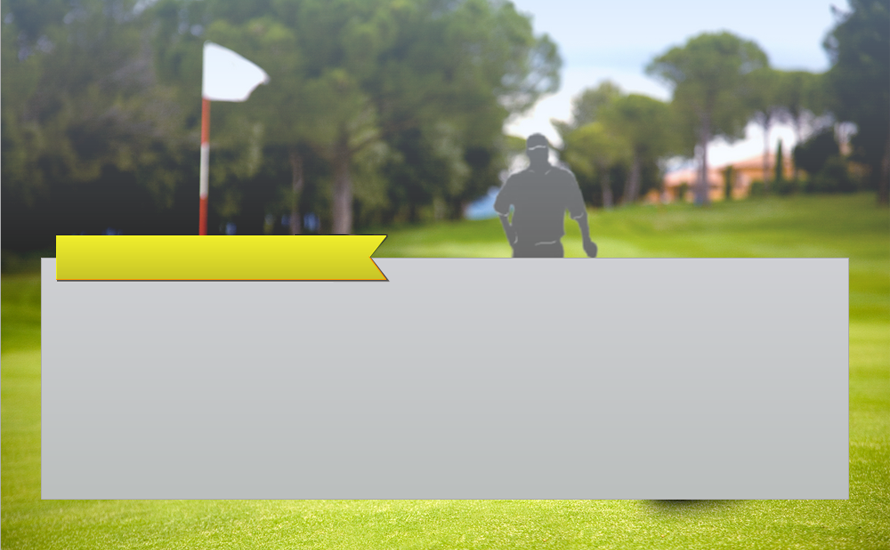 Joke Why did the golfer bring a cup and saucer to her golf game? Because she was ready for her tee time!

What to do after a penalty...

Water hazard (Yellow stakes): In this, the player receives a one-stroke penalty and has to play from as close as possible to the spot from which he played the last shot.

Lateral water hazard (Red stakes): The player receives a one-stroke penalty and he has to drop the ball outside the hazard within two club lengths from where the ball previously crossed the margin. 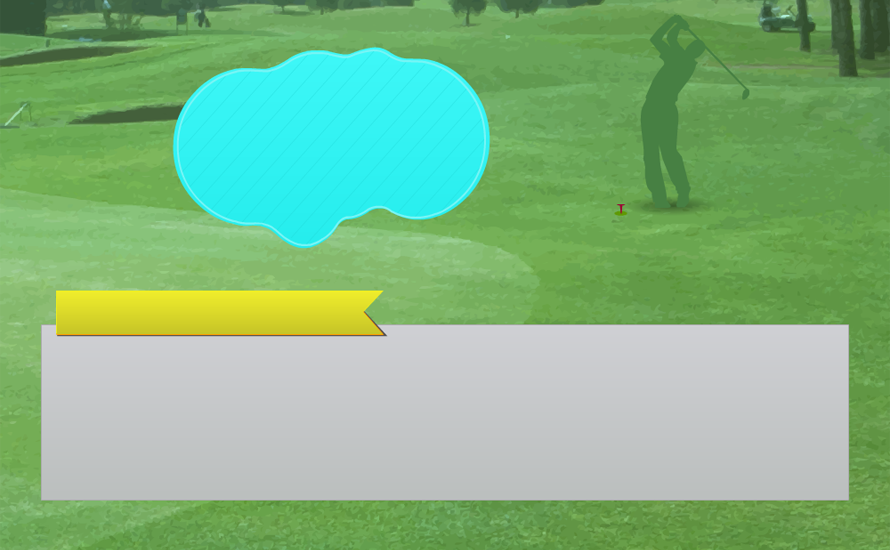 The 8th – 14th century – People played a various games that were similar to golf.

The 15th century – The modern game of golf originated in Scotland.

1672 - Golfers played in Scotland, on the oldest golf course in the world.

1860 – Golfers played in the world's oldest golf tournament in Scotland.

1867 – Women form the first group of women golfers in Scotland. 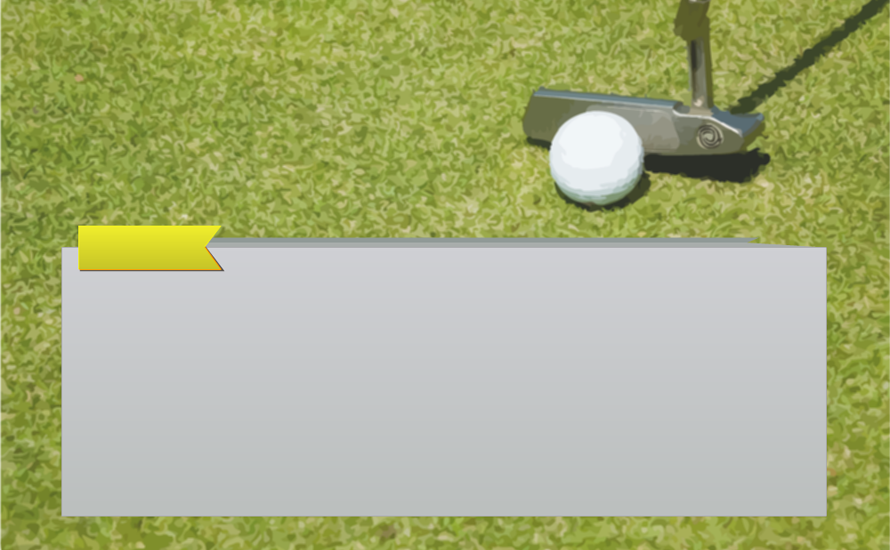 1954 – Golf tournaments aired on television for the first time. 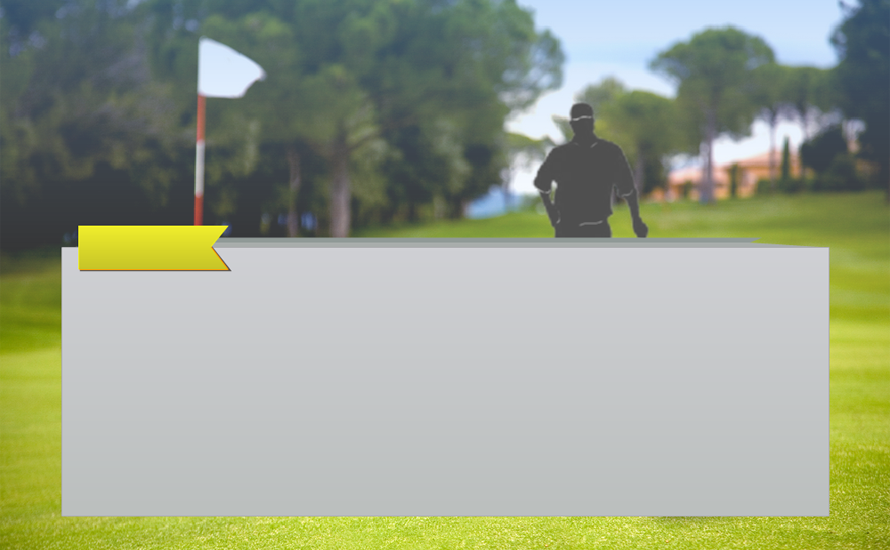 1997 - Tiger Woods won the Masters as the youngest winner in Masters history.

2003 - Annika Sörenstam became the first woman in 58 years to compete in a men's professional golf tournament.

2004 - Michelle Wie became the youngest woman (and only the fourth overall) to play at a PGA Tour event (she was 14 years old). 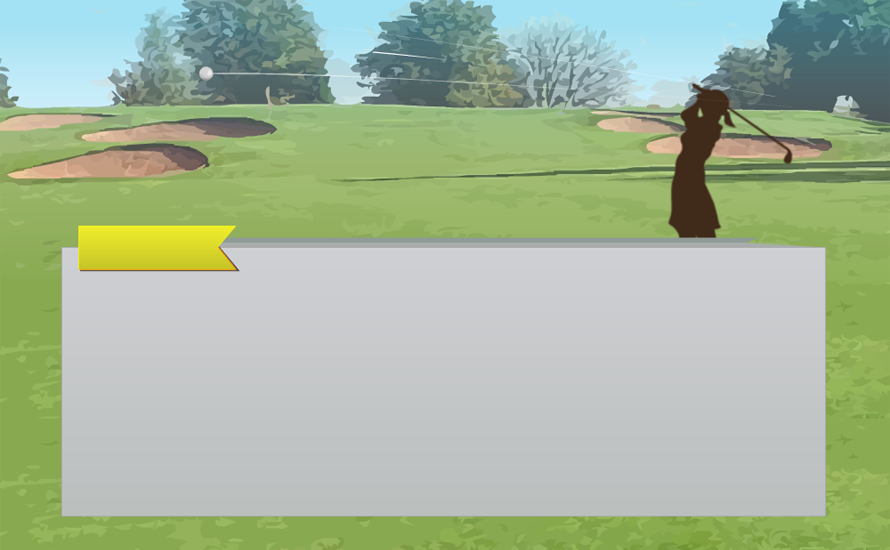 Jack Nicklaus is one of only five golfers who won a Grand Slam – he won all four of golf's modern majors, including The Masters, the U.S. Open, the British Open, and the PGA championship.

He has won several international titles, including 6 Masters, 5 PGA Championships, 4 U.S. Opens, and 3 British Opens. He is part of "The Big Three" in golf with Arnold Palmer and Gary Player. 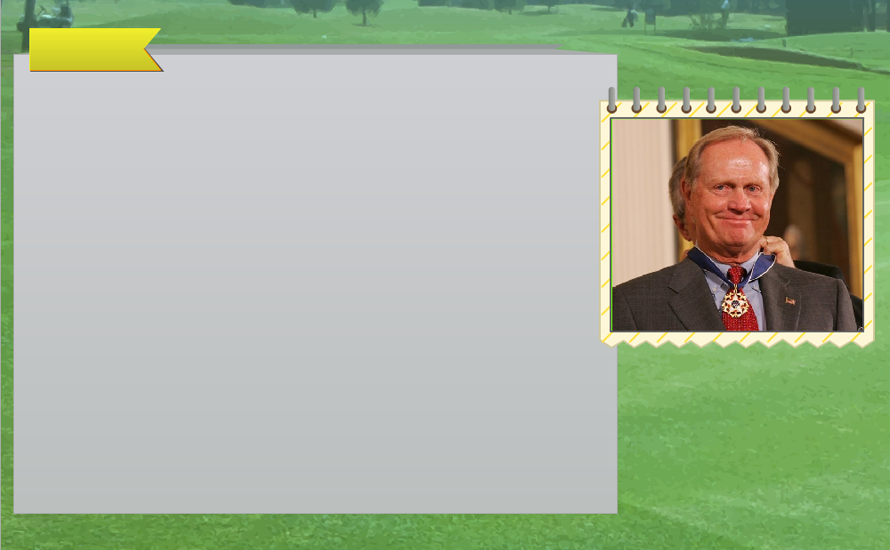 Honors:
Palmer was awarded the Presidential Medal of Freedom in 2004 and the Congressional Gold Medal in 2009.

Palmer was first to win the Masters Tournament 4 times and is one of the greatest players in the history of men's professional golf.
Palmer won 92 tournaments during his career.

He was the first superstar on television in the 1950’s.
He is part of "The Big Three" in golf, along with Jack Nicklaus and Gary Player. They popularized the golf around the world. 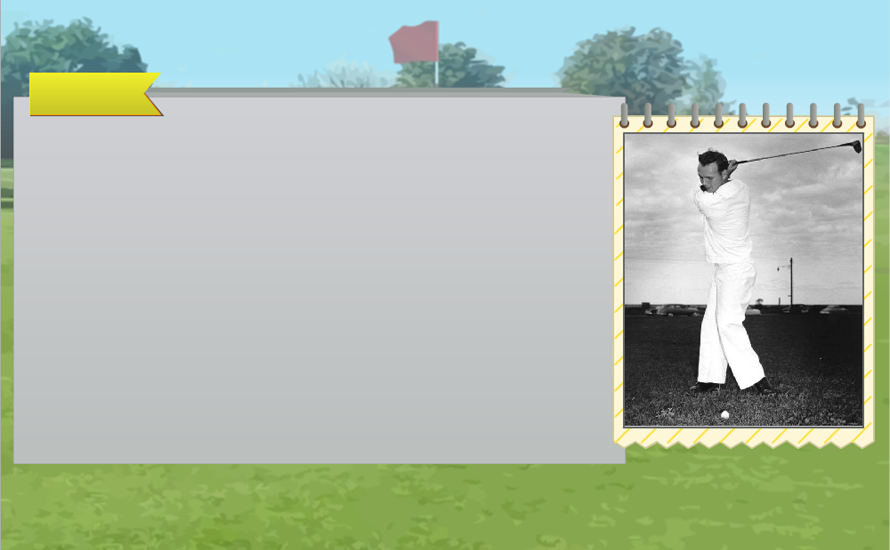 Honors: South African Sportsman of the Century in 2000 First international recipient of the PGA Tour’s Lifetime Achievement Award in 2012.

Gary Player started playing professional golf in 1957 and won the championships many times. He was the 3rd golfer to win a Grand Slam. He is also part of “The Big Three” with Jack Nicklaus and Arnold Palmer.

He is also a golf course designer, and has a doctoral degree in law. He is the only player to win the British Open in three different decades. He is very dedicated to charity. 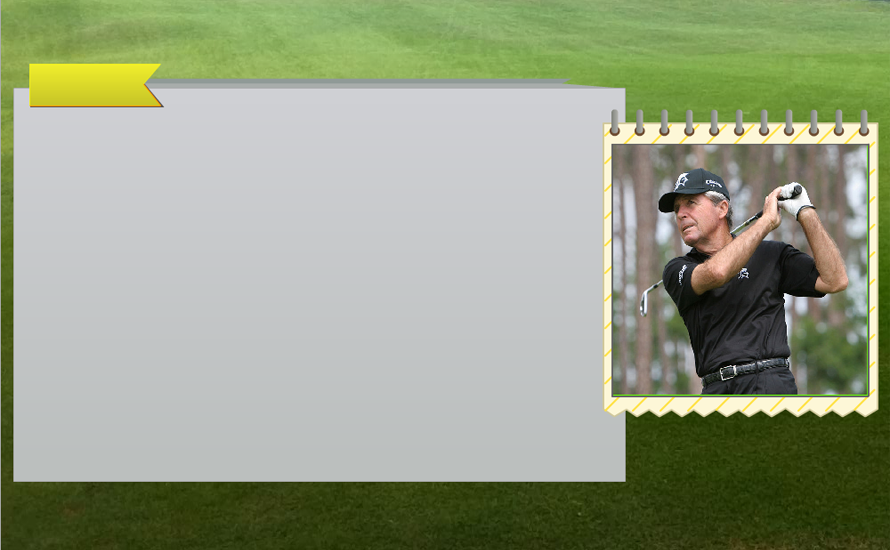 In 2000, Woods became the youngest to complete the career Grand Slam. He was also the youngest Masters champion at the age of 21. 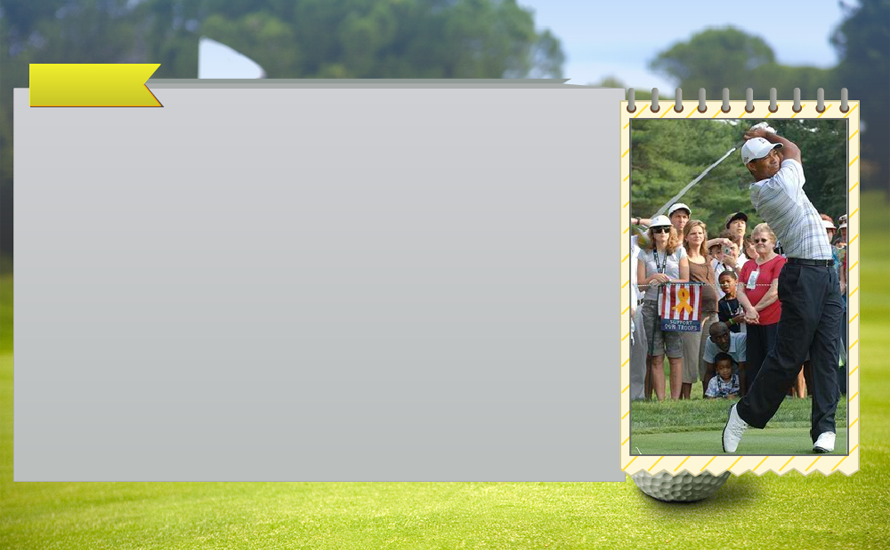 The modern golf game originated in Scotland in the 15th century. It is an individual sport in which the golfers hit the ball into a series of holes. The goal is to get the ball into each hole with the lowest number of strokes.