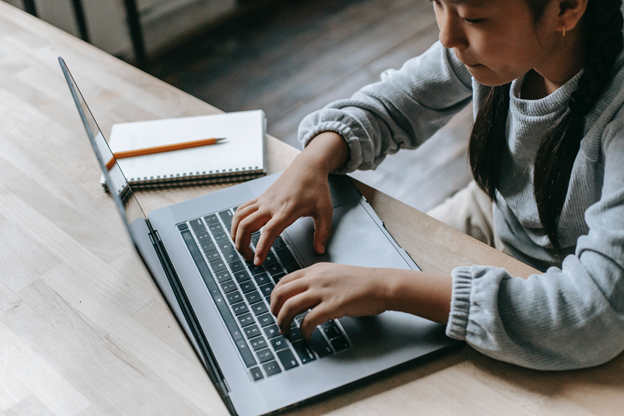 Once only for secretaries, typing has now expanded to a necessary 21st-century skill.  Becoming a fluent typer begins with effective practice in touch typing skills, a method enabling the typist to focus on the screen and content without looking at the keyboard.  Helping kids learn touch typing at an early age can dramatically increase their typing fluency until they are typing paragraphs without even thinking about the location of keys.

What Is Typing Fluency?

Typing fluency is twofold – both speed and accuracy are main indicators.  As a general rule, students should aim to type five words per minute for every grade level, meaning a third grader should type at 15 wpm while a fifth grader should be at 25 wpm. The opposite of fluency would be the “hunt-and-peck” method, often characterized by index fingers hesitantly poking at a keyboard.

Kids as young as six can develop touch typing skills, though it’s never too late.  The more time kids spend typing, the more words per minute (wpm) they will accrue.  In 20 minutes per day, students can move from learning single letter locations to typing sentences, eventually moving to typing practice paragraphs. This is a technique called touch typing, which allows for efficiency and active processing of information. 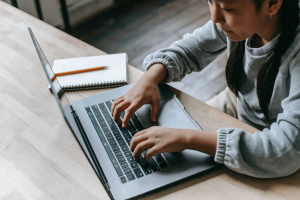 Touch typing develops muscle memory in the fingers and hands based on the home row keys.  Students move from letters to typing sentences and eventually typing paragraphs without even thinking about it.  It frees up their cognitive energy so that their working memory can brainstorm and translate ideas to the screen.

For students with learning disabilities like dyslexia or those with handwriting difficulties, touch typing can be a game changer.  Focusing on the content without the anxiety of hunting for letters allows a freedom to let their minds explore.  It also removes the stigma of a messy paper riddled with eraser marks, as editing and revision can be done right on the screen.  Improving typing fluency should be a main goal in their primary years.

Improving typing fluency can happen in just minutes each day.  For elementary-aged students, just two 10-15 minute sessions per day rapidly increases fluency.  Focusing on accuracy over speed, the typing program at Turtlediary moves at a steady pace, building from lesson to lesson.  Beginning with single-letter lessons, students eventually move to typing sentences and then continue on until they are typing paragraphs on their own.

Typing also improves reading, writing, and spelling skills.  TurtleDiary.com makes typing fun by not only providing step-by-step modules starting with home row basics, but also games where advanced students are typing paragraphs to challenge their own word-per-minute scores.  After 10-12 weeks of daily practice, most students will hit 30 words per minute!